Where the Land Meets the Sea: Hurricane Sandy and Its Impact on Rhode Island’s Archaeological Record 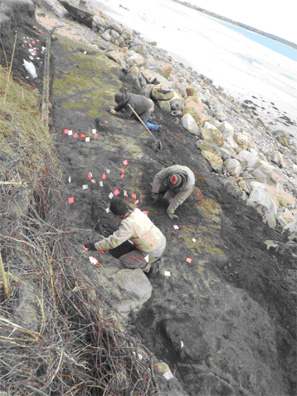 Hurricanes and Nor’easters have routinely battered the Rhode Island south coast impacting the lives of many of its residents and resulting in millions of dollars in property damage. In addition to significant property damage, storm surge and wind-driven waves from Hurricane Sandy in October 2012 eroded considerable sections of the state’s south shore damaging many historical and archaeological sites situated at the contact between the land and sea.

Jay Waller, senior archaeologist with the Public Archaeology Lab and South County History Center trustee, will discuss the often-overlooked effects that storms have on Rhode Island’s archaeological heritage and summarize the results of recent emergency response and preservation planning surveys conducted in response to this recent disaster. These archaeological surveys represent the first large scale, systematic attempts to identify and evaluate vulnerable archaeological sites situated along the Rhode Island coast.