LIFE IN THE DOGHOUSE – newportFILM Outdoors 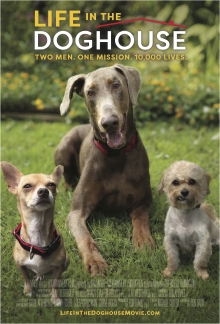 ABOUT THE FILM: As a child, Danny Robertshaw’s mom would take him to rescue shelters and explain, “You don’t buy a pet, you save one.” So, in 2005, when Hurricane Katrina’s surge broke through the levees in New Orleans and thousands of dogs were left stranded, Danny and his partner of nearly 30 years Ron Danta, stepped up to save the lives of the abandoned dogs. The veteran horse trainers and animal lovers drove their horse trailer down and back from South Carolina to New Orleans bringing home 40-60 dogs per trip. Dedicating all of their own resources to the effort, including their own home, they eventually rescued and found homes for more than 600 dogs and Danny & Ron’s Rescue 501(c)(3) was founded.

Life in the Doghouse, directed by Ron Davis the award – winning filmmaker of the NY Times Critic’s pick and 2016 box-office hit, Harry and Snowman, tells the inspiring life stories of these two men and the selfless work they continue to do. With a no-kennel policy, there can be as many as 75 dogs living with them in their home at any given time; the dogs also join them on the horse show circuit on their journey of finding their “forever home”. Danny & Ron were honored with the 2008 ASPCA Humanitarian Award for their unwavering personal sacrifice and unique approach to dog rescue & adoption during hurricane Katrina.

Ten years and almost 10,000 dogs later, Danny & Ron’s Rescue has become the voice for abused, abandoned and starving dogs. Their story captures hearts, entertains, educates and will inspire millions to make the right choices when it comes to man’s best friend.