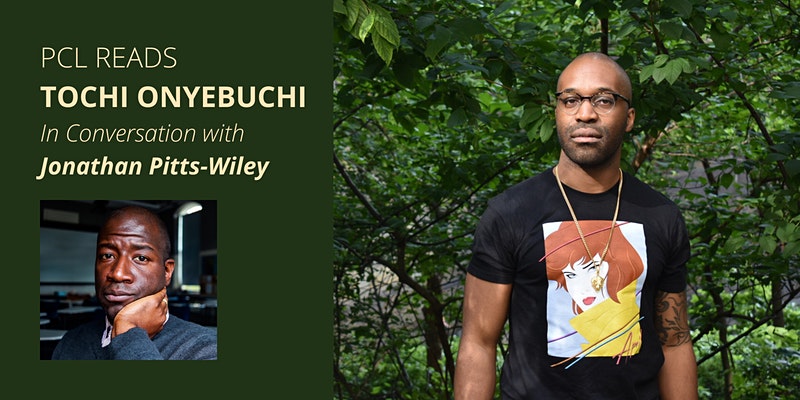 Tochi Onyebuchi joins us on Wed, Feb 10 at 6PM to discuss RIOT BABY, a companion read for the 2021 Reading Across Rhode Island selection.

Co-hosted virtually by Amy VanderWeele at South Providence Library and Rhode Island Center for the Book, the conversation will be moderated by Jonathan Pitts-Wiley, the Artistic Director of Mixed Magic Theatre (MMT) in Pawtucket and history teacher at Moses Brown School. Place a hold on Riot Baby in our catalog. Get free tickets through Eventbrite to receive the Zoom link.

“To say that I am honored that Riot Baby has been selected for this distinction (a companion read for the 2021 Reading Across Rhode Island selection) would be to indulge in criminal understatement. To have it paired as the Fiction Companion with Stamped renders the honor even more meaningful. Both books speak to the depth at which racial injustice permeates American society–the omnipresence of the forces arrayed against equity–but, in so speaking, they are pieces of the fight against just such injustice. If Riot Baby and Stamped aren’t twins, they’re definitely sitting next to each other, sharing a table at the cookout.” – Tochi Onyebuchi

“Tochi is truly a man of arts and letters; the realities he shapes provide an incredible opportunity to both escape from and engage with the world in which we live. More impressive than his capacity to consistently deliver high-quality work is the incredible decency and uprightness with which he moves through the world. Tochi is the kind of person you want to root for and I’m totally thrilled to sit down for some lively conversation with him.” – Jonathan Pitts-Wiley

Tochi Onyebuchi is the author of Beasts Made of Night, its sequel Crown of Thunder, War Girls, and his adult fiction debut Riot Baby, published by Tor.com in January 2020. He has graduated from Yale University, New York University’s Tisch School of the Arts, Columbia Law School, and L’institut d’études politiques with a Masters degree in Global Business Law.

His short fiction has appeared in Asimov’s Science Fiction, Omenana, BLACK ENOUGH: STORIES OF BEING YOUNG & BLACK IN AMERICA, and elsewhere. His non-fiction has appeared in Uncanny Magazine, Nowhere Magazine, Tor.com, and the Harvard Journal of African-American Public Policy. He is the winner of the Ilube Nommo Award for Best Speculative Fiction Novel by an African and has appeared in Locus Magazine’s Recommended Reading list.

Born in Massachusetts and raised in Connecticut, Tochi is a consummate New Englander, preferring the way the tree leaves turn the color of fire on I-84 to mosquitoes and being able to boil eggs on pavement. He has worked in criminal justice, the tech industry, and immigration law, and prays every day for a new album from System of a Down.

Rooted in foundational loss and the hope that can live in anger, Riot Baby is both a global dystopian narrative and intimate family story with quietly devastating things to say about love, fury, and the black American experience.

Ella and Kev are brother and sister, both gifted with extraordinary power. Their childhoods are defined and destroyed by structural racism and brutality. Their futures might alter the world. When Kev is incarcerated for the crime of being a young black man in America, Ella―through visits both mundane and supernatural―tries to show him the way to a revolution that could burn it all down.

Click here or at the link below to register.