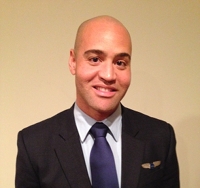 Michael began flight lessons at age 17, received an Aeronautical Science degree from Embry-Riddle, and has been flying professionally since 2007. He has amassed 3 transport category type ratings, served as a Check Airman and Ground School Instructor, and currently flies for jetBlue Airways as an Airbus A320 pilot based in Boston, MA.

Michael will discuss the role aviation has played over the course of the last 100+ years. He will start with the first powered flight, the Wright Brothers historical accomplishment, and move forward looking at the influence of the Jet Age and how it has shaped society, helps to sustain economies, and cultivates a modern civilization that enables interpersonal interaction unheard of a century ago. Time permitting, Michael will give a brief demonstration on lift and aerodynamics, explaining how airplanes achieve flight!