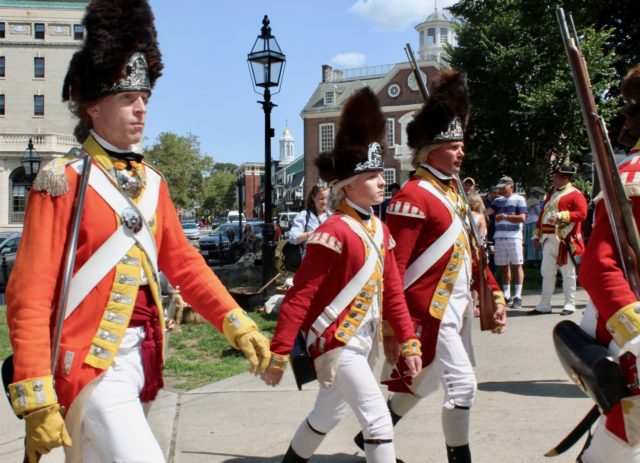 This event highlights civilians and how the Revolutionary War impacted their daily activity. Meet dozens of costumed interpreters portraying residents of colonial Newport, as well as the British soldiers who occupied the seaport. Learn about the challenges and fears that loyalists, patriots, and soldiers faced with war on their doorstep!

Free events will include:
•Stations around Washington Square to engage with civilian activities ranging from the Pitts Head Tavern and the Crown Coffeehouse to a laundry demonstration and British Officer’s Club.
•Visit the Wanton-Lyman-Hazard House (17 Broadway) and experience the tension of the war as Mary Almy prepares her boarding house and family for the potential battle.
•Outside the Colony House, snap a selfie inside a reproduction sentry box while members of the British army stand guard.
•Children’s activity at the Museum of Newport History & Shop (127 Thames Street).

During the Spy Challenge, step into the reenactment action and support the patriot cause. Purchase the Spy Challenge at the Museum of Newport History & Shop, which offers clues guiding visitors to collect important intelligence information from undercover patriot spies. Can you help transport this intelligence off the island to help General Washington win the War for Independence? Proceeds help offset event costs.