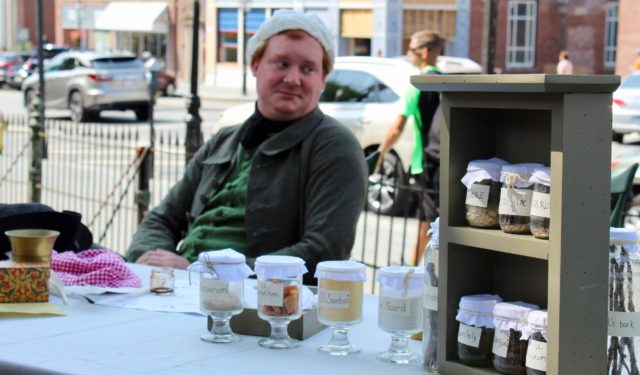 Newport is a city known for firsts. Between 1755-1756 the first anatomical and surgical lectures in the Colonies were presented by Dr. William Hunter at the Colony House.

On Thursday February 15, 2018, at 5:30pm, the Newport Historical Society will recreate aspects of Dr. Hunter’s talk when they host an 18th century medical lecture. Dr. Hunter, portrayed by first person interpreter Seán O’Brien, will share insight on the latest medical knowledge from England while discussing remedies and cures that are available at his 18th century apothecary shop.

Seán O’Brien, a teacher and living historian who spends his time moving between the 18th and early 20th centuries, is a regular participant in the Society’s living history events. He has portrayed lead roles ranging from loyalist Martin Howard during the Stamp Act Protest (2015) to Governor Ward during the Naval Impressment (2016). He earned his M.A. in 18th Century Studies from the University of York, in northern England, where his dissertation focused on the self-identity of military surgeons in the British Army. He currently resides in Salem, MA.

A selection of Dr. Hunter’s products, made by Caswell-Massey, will be available for purchase. This event takes place at the Colony House on Washington Square, the same location where the medical lectures originally took place. General admission costs $5 per person or $1 for Newport Historical Society members along with active duty and retired military.