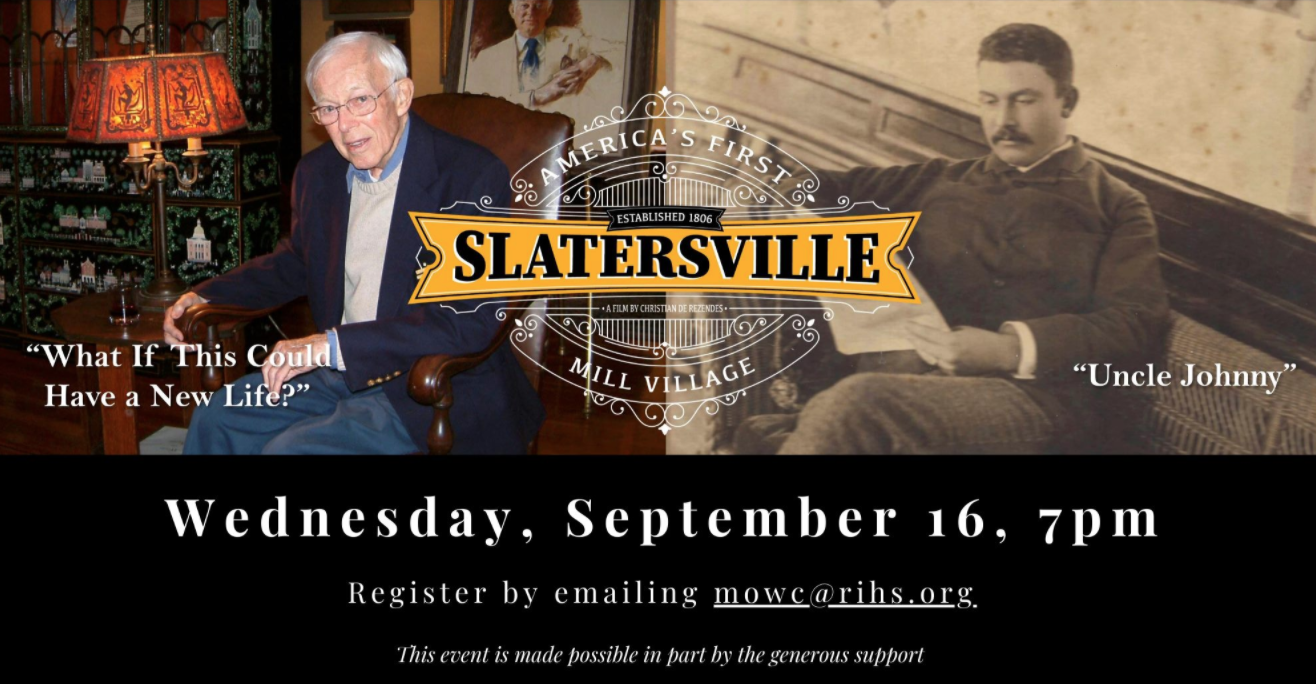 The Museum of Work & Culture will offer a virtual documentary screening on Wednesday, September 16 at 7pm when critically acclaimed filmmaker Christian de Rezendes will present two segments of Slatersville: America’s First Mill Village, “What If This Could Have a New Life?” and “Uncle Johnny.”

In this talk, documentarian de Rezendes will discuss his upcoming historical documentary series, Slatersville: America’s First Mill Village, which will cover two centuries of history. Though the series is not set to premiere until 2021, de Rezendes will share two work-in-progress segments.

The first titled “What if this could have a new life?” highlights the work of the late painter Maxwell Mays and his depiction of Slatersville in 1895. Painted by Mays in the mid-1990’s, this vibrant and folkloric work decoates the walls of countless North Smithfield homes. This story is told by Max’s friend and former President of the Providence Art Club, David DePetrillo, with further commentary by historian Barbara Tucker.

The second, “Uncle Johnny,” is a continuation of previous screening “The Wedding Present with 27 Rooms,” which focused on Clouds Hill Victorian House Museum in Warwick. After John Whipple Slater inherits his father William Smith Slater’s fortune in 1882, his management of Slatersville descends into conflict with his lengthy absences and reputation for extravagance. This marks the beginning of the end for the Slater family’s ownership of Slatersville at the end of the 19th century.

Register to receive an invitation to this Zoom event by emailing mowc@rihs.org.

This talk is made possible in part by the Rhode Island Council for the Humanities.
Through his company, Breaking Branches Pictures (est. 1996), de Rezendes has produced critically acclaimed feature films including 41, a documentary about the youngest victim of the Station Nightclub Fire, Getting Out of Rhode Island, a fully improvised dramedy feature, Alzira’s Story, the family inspired documentary, and Raising Matty Christian, a documentary about a man born without full limbs whose accomplishments inspired thousands. To date, his work has received more than 35 filmmaking awards. Many of his twenty plus directing credits have been broadcast on PBS and screened internationally at film festivals. De Rezendes continues to direct, film and edit promotional pieces for a wide variety of corporate, non-profit and commercial clients as well as his own projects.

The Museum of Work & Culture