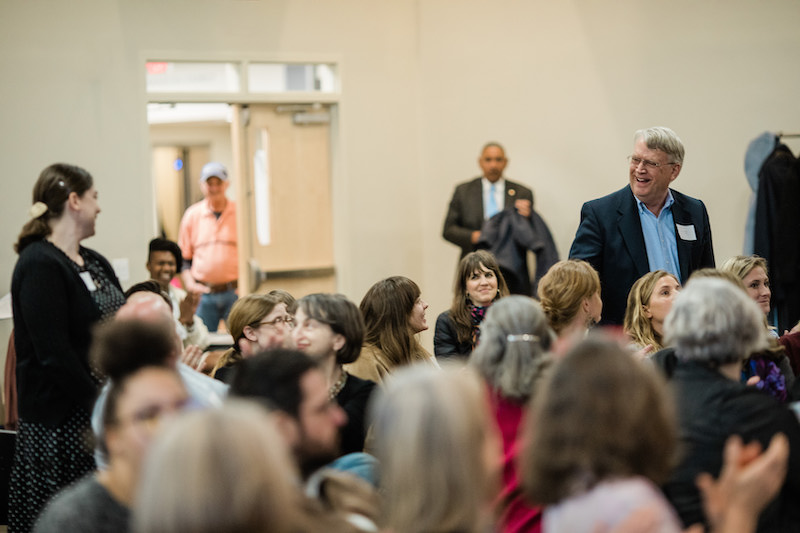 April 22, 2019 – Over 60 representatives from civic and cultural organizations around Rhode Island gathered at the Jewish Alliance of Greater Rhode Island Thursday, April 18, 2019 as the Rhode Island Council for the Humanities announced a total of $140,000 in new grants for 15 humanities initiatives across the state. The announcement recognized Rhode Island’s strong humanities community and the role the humanities play in strengthening our democracy and enriching our culture.

Humanities Council Board Chair, Touba Ghadessi welcomed the audience, elected officials, and Council partners noting, “Together, we support the making of history, the telling of important stories, and the strengthening of community. It is by grounding ourselves in our diverse local communities that we can grow nationally. Because of the amazing work our grantees accomplish, Rhode Island is at the forefront of cultural innovation. And that is definitely something to celebrate!”

Congressman Jim Langevin (RI-D2) congratulated the 2019 major grantees on behalf of the full Rhode Island Congressional delegation, all of whom take a leading role in supporting the National Endowment for the Humanities (NEH) and the legacy of the late Senator Claiborne Pell, who led efforts to establish the NEH and the National Endowment for the Arts in 1965. Rep. Langevin also spoke about the need to support cultural resiliency as a matter of civic education in an era when it is essential to our national security.

“The Humanities Council is dedicated to seeding, supporting, and strengthening the connection between culture and community. We are truly proud to be part of Rhode Island’s cultural ecosystem and the outstanding programs and projects that the grants awarded tonight will support,” said Elizabeth Francis, Executive Director.

Announced by Michael Fein, who leads the Board’s Grants Policy Committee, and Logan Hinderliter, Associate Director for Grants & Partnerships, the awards will support humanities projects ranging from documentary shorts highlighting the contributions of Rhode Island women as part of the 2020 centennial of women’s suffrage, to history-based “sonic memory” installations in a Providence neighborhood, to an outdoor film festival in Newport that draws thousands of people together each summer.

The grant announcement closed with remarks from Providence Mayor Jorge O. Elorza who recognized the Humanities Council for addressing societal challenges and increasing empathy and civic resiliency through the humanities.

The Rhode Island Council for the Humanities seeds, supports, and strengthens public history, cultural heritage, civic education, and community engagement by and for all Rhode Islanders. As the only dedicated source of funding for public humanities in Rhode Island, we are proud to support museums, libraries, historic sites, schools, preservation and historical societies, community and cultural organizations, individual researchers and documentary filmmakers to bring Rhode Island’s stories to like and to amplify the state’s many diverse voices.

The Humanities Council was established in 1973 as the independent state affiliate of the National Endowment for the Humanities (NEH). A private nonprofit 501(c)3 organization, the Council is supported by federal funds from the NEH as well as by individuals, corporations, and foundations.

Please see the full list of funded projects below. For more information, contact Rachael Jeffers at rachael@rihumanities.org or (401) 273-2250 x205. All photographs by Matt Ferrara Photography.

Public Projects
In support of organizations and projects that enrich and enliven the life of our state through public humanities programs.

DOCUMENTARY FILM
In support of documentary films that preserve Rhode Island’s stories and bring its history to life.