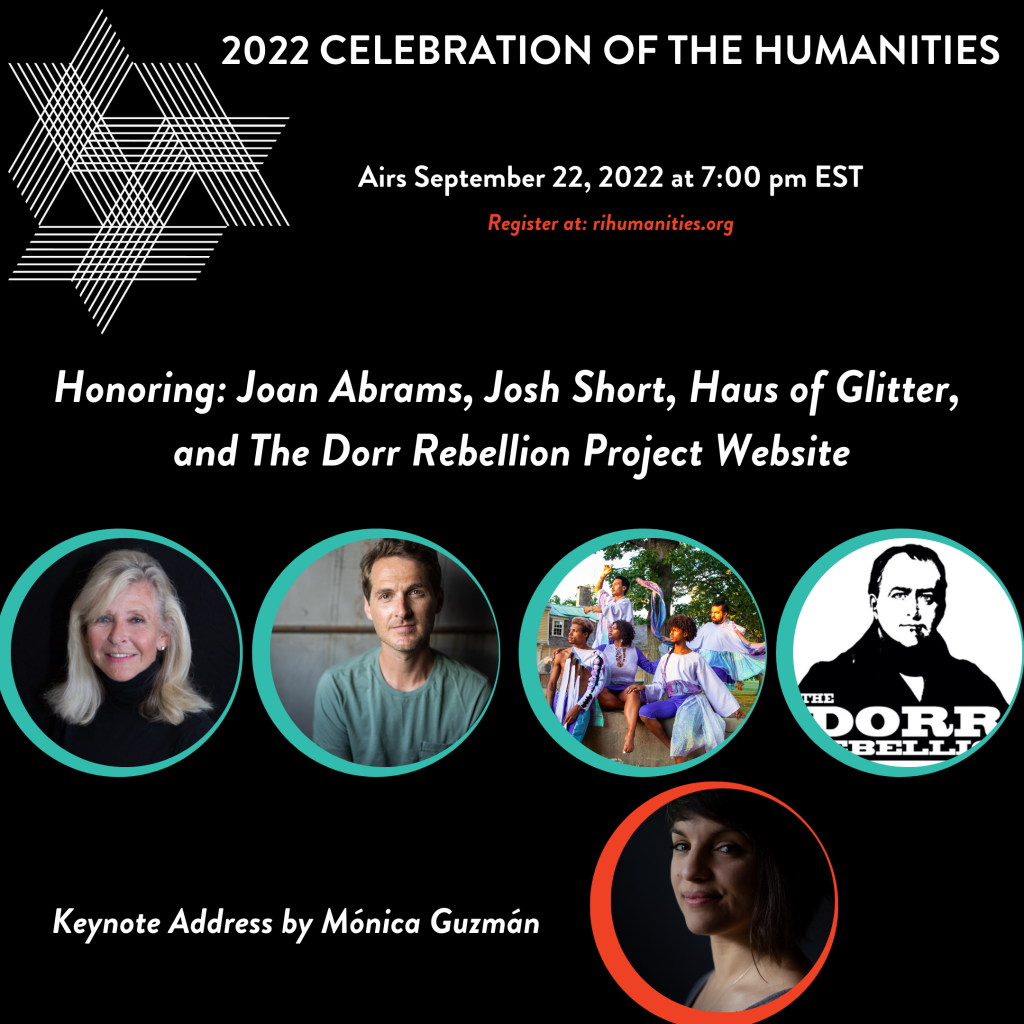 PROVIDENCE, RI – The Rhode Island Council for the Humanities is proud to announce the 2022 Celebration of the Humanities which will focus on the intersection of the humanities and civic health through time-honored awards to local leaders and a new featured keynote address from nationally recognized journalist, bridge-builder, and author Mónica Guzmán. Guzmán is the author of the recently released book I Never Thought of It That Way: How to Have Fearlessly Curious Conversations in Dangerously Divided Times and will speak to the ways the humanities and civic health intertwine, spark curiosity about our communities and histories, and illuminate new pathways. The 2022 Celebration honorees include: Joan Abrams, Josh Short, Haus of Glitter for The Historical Fantasy of Esek Hopkins, and The Dorr Rebellion Project Website (a collaboration of the Phillips Memorial Library+Commons at Providence College, Dr. Erik Chaput and Mr. Russell DeSimone.)

The 2022 Celebration of the Humanities virtual program will air on September 22, 2022 at 7:00pm EST. The virtual event is free and open to the public. For free registration, click here.

Sponsorship of the program is the best way to honor this year’s remarkable honorees and support the Humanities Council’s mission to seed, support, and strengthen public history, cultural heritage, civic education, and community engagement by and for all Rhode Islanders. All sponsors will receive a copy of Guzmán’s book. Sponsorship begins at $100; benefits are detailed on the Council’s website: rihumanities.org/get-involved/celebrate.

About the 2022 Celebration of the Humanities Honorees:

HONORARY CHAIRS’ AWARD FOR LIFETIME ACHIEVEMENT IN THE HUMANITIES

The Honorary Chairs’ Award for Lifetime Achievement in the Humanities is presented annually to celebrate an individual or group whose career achievements demonstrate humanities excellence, reflect the Humanities Council’s mission and core values, and enrich public life in Rhode Island. A resident of Bristol, RI, Joan Abrams has served for decades in volunteer and professional capacities to support many of the state’s leading humanities, cultural, arts, and environmental organizations including Save the Bay, Festival Ballet, Blithewold, the Newport Art Museum, and the Humanities Council, among many others. Abrams embodies the connection between the humanities and civic health through community participation and contributing to community wellbeing. A lifelong learner and educator, Abrams served as a professor and the director of the Master’s in Communications Management Degree Program at Simmons College in Boston for over 15 years. Abrams has served on the Dean’s Advisory Council of the Kennedy School of Government at Harvard University as well as on the Board of Governors of Higher Education for the three Rhode Island state colleges and university. Her dedicated board service and leadership all across Rhode Island has influenced the state’s humanities, environmental, and educational sectors in innumerable ways.

Abrams served on the national Board of Directors of the Federation of State Humanities Councils and on the board of the Rhode Island Council for the Humanities for three terms, April 2019-March 2022 and 2011-2017, serving as chair from 2015-2016. In 2010, she was named Rhode Island’s Philanthropic Citizen of the Year. Her dedication to Rhode Island has contributed immeasurably to the cultural richness and environmental resources of the state.

TOM ROBERTS PRIZE FOR CREATIVE ACHIEVEMENT IN THE HUMANITIES

The Tom Roberts Prize for Creative Achievement in the Humanities recognizes an individual or organization whose work extends the fields of the humanities by blending the wisdom and methods of the humanities in an inventive, original, and imaginative way with topics, disciplines, and formats not ordinarily associated with traditional humanities education. As Founder and Artistic Director of the Wilbury Theatre Group, Josh Short has built a dynamic company that breathes life into the twin ideas that theatre must be for everyone and theatre must make you think. For a dozen years, Short has demonstrated an unwavering commitment to producing theatre that reflects our shared human ability to examine and express our thoughts, feelings and values, bringing stories to the stage from the widest swath of sources imaginable: classic texts, recent creations, world premieres, and works-in-progress.

In 2014, Short led The Wilbury Group’s efforts to establish FRINGEPVD: The Providence Fringe Festival with 50 handpicked artists in five venues throughout Providence, carrying on the fringe tradition of theatre produced outside the bounds of traditional institutions. FRINGEPVD has grown to become a voting member of the United States Association of Fringe Festivals and the World Fringe Congress. It is the largest fringe theatre festival in New England.

At the height of the pandemic, Short collaborated with other cultural and service organizations in the theatre’s Olneyville neighborhood to ensure that the stories of Rhode Islanders in one of the hardest hit zip codes were told through Capture the Block: Stories from Ward 15, supported in part through the Humanities Council’s Culture Is Key initiative.

A graduate of the University of Rhode Island, Short lives in southern Rhode Island with his family.

INNOVATION IN THE HUMANITIES AWARD

Haus of Glitter and The Historical Fantasy of Esek Hopkins

The Innovation in the Humanities Award recognizes the innovative implementation of the humanities within an organization to achieve a specific goal or a collaboration between organizations to work beyond their institutional walls in order to achieve a shared vision. The Haus of Glitter Dance Company and Performance Lab is the 2022 recipient for their activist dance opera The Historical Fantasy of Esek Hopkins — a singularly moving, transformative, and effective collective exploration and intervention into Rhode Island’s history of slavery and race.

This effort was part of the Haus of Glitter’s Artist Residency to live in, heal with, and reimagine the former Esek Hopkins Homestead in Providence, which was built in 1756. It was home to Admiral Esek Hopkins who captained the slave ship Sally, one of the deadliest and cruel voyages with enslaved people in Rhode Island’s history as a major center of the Triangle Trade. The Historical Fantasy of Esek Hopkins, performed on the grounds of the Homestead in Summer 2021, imagines what life would be like today if colonization or slavery never happened by telling the story of a single Black person lost on the voyage and imagining her story, family, emotions, and legacy. Haus of Glitter creates work that centers historical and artistic investigation on Queer/Feminist Black, Indigenous, People of Color (BIPOC) wisdom, healing, and liberation.

Through their performance-based pedagogy, Haus of Glitter opened new pathways for public humanities practices as well as conversations about race, memory, and healing in the state. This activist dance opera provides a model for historical intervention, community ritual, and intergenerational curriculum that holds the potential to transform how place and commemoration are approached through an intersectional lens.

The Haus of Glitter residency was made possible by a two-year PARKIST Artist Residency with The City of Providence Department of Art, Culture, and Tourism and the Parks Department. The purpose was to enable artist groups to animate little-used historic properties.

The Public Humanities Scholar Award recognizes outstanding public humanities work in teaching and scholarship that advances the civic and cultural life of Rhode Island. The Dorr Rebellion Project Website, a collaboration of the Phillips Memorial Library+Commons at Providence College, Erik Chaput, PhD, and Russell DeSimone, was launched in September 2011 and continues to grow and develop with the aim to establish an authoritative online educational resource on the Dorr Rebellion and to engage in new forms of discourse.

The Thomas Wilson Dorr Rebellion of 1841-43 challenged the bounds of American democracy, constitutionalism, and multiculturalism and is considered the most significant constitutional and political event to occur in Rhode Island history. Though largely unknown outside the Ocean State, the Dorr Rebellion continues to be relevant and instructive today.

The project illustrates the power of collaboration to ensure that humanities resources related to the history of civic health are publicly accessible.

Mónica Guzmán is an award-winning journalist, bridge-builder, and the author of I Never Thought of It That Way: How to Have Fearlessly Curious Conversations in Dangerously Divided Times. Guzmán also serves as director of digital and storytelling at Braver Angels, the nation’s largest cross-partisan grassroots organization working to depolarize America. She is host of a live interview series at the Pacific Northwest’s independent news outlet Crosscut and is cofounder of the award-winning Seattle newsletter The Evergrey. She was a 2019 fellow at the Henry M. Jackson Foundation, where she studied social and political division, and a 2016 fellow at the Nieman Foundation for Journalism at Harvard University, where she researched how journalists can rethink their roles to better meet the needs of a participatory public. She was named one of the 50 most influential women in Seattle and served twice as a juror for the Pulitzer Prizes. A Mexican immigrant, Latina, and dual US/Mexico citizen, she lives in Seattle with her husband and two children.

“Monica Guzman brings bad news and good news. The bad news is there is no answer for the problems of our polarized, toxic politics. The good news is, we don’t need answers. We need more questions. In this perceptive, wise, accessible book, Guzman shows us how to ask more humane questions of our fellow Americans. She shows us that by seeking truly to understand rather than judge, every one of us can improve our country’s civic culture. Curiosity cures. Read this book, then live it.”—Eric Liu, CEO, Citizen University, and author, You’re More Powerful Than You Think: A Citizen’s Guide to Making Change Happen