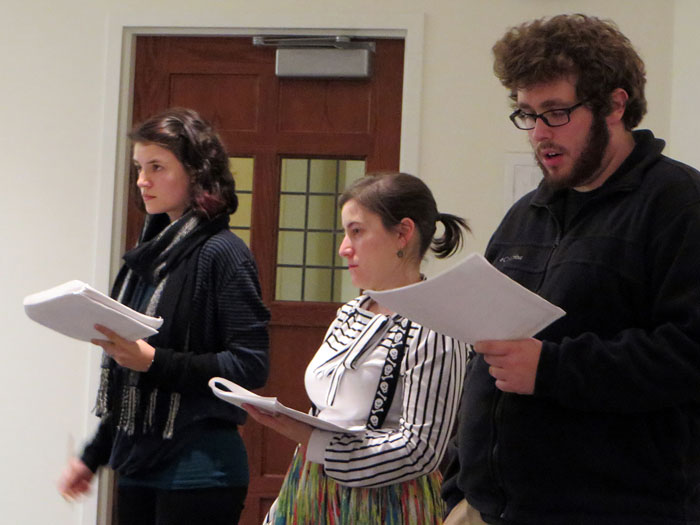 Under Armor: Pell Center production of Greek tragedy still speaks to problems faced by modern day veterans returning home, NEWPORT MERCURY, November 5, 2014 • Alexander Castro
The Council awarded a special grant to The Pell Center at Salve Regina University to support a theatrical production of “Ajax”–a Greek tragedy set in the Trojan War–as a vehicle for opening community conversations about the challenges facing veterans returning from war. The grant was made as part of the National Endowment for the Humanities’ “Standing Together: The Humanities and the Experience of War” special initiative, which supports veterans-related programming within each state and encourages a national network of humanities programming for America’s military, veterans, and their communities.

A recent post on the popular Facebook street portraiture page Humans of New York achieved the succinctness of an aphorism when the photographer asked two men, “What do you feel most guilty about in life?”

“Going to Iraq and killing people,” they replied.

The Pell Center at Salve Regina University’s “Story in the Public Square” initiative will explore soldiers’ guilt with a traveling production of Sophocles’ “Ajax” opening Nov. 11. The five-performance tour of Rhode Island is the fruit of a collaboration with Providence College and a grant from the Rhode Island Council for the Humanities (RICH). The free performances are open to the public. A community dialogue on veterans’ issues will accompany each show.

Robert Hackey, visiting fellow at the Pell Center and a professor at Providence College, wrote the grant that successfully wooed RICH. Hackey was inspired by Bryan Doerries’ “Theater of War,” finding “Ajax” the ideal vehicle to drive discussion on “the experience of returning vets.” “[Ajax’s] experiences are pretty spot on with soldiers returning from war today. [He’s] driven to serve with honor…After he’s had a berserk rampage, he’s…trying to return to normal life. As he’s struggling with this, he’s thinking about his family, his wife, his son —and how he’ll tell his family what he’s done overseas,” says Hackey.

The titular character of Sophocles’ classic feels spurned when Odysseus, his rival, is awarded the armor of Trojan war hero Achilles. The goddess Athena deludes the vengeance-thirsty Ajax into thinking some innocent farm animals and shepherds are his enemies. Ajax viciously slays and tortures the herdsmen and their cuddly critters. When Ajax comes to, shame overwhelms him, and suicide appears to be the only cure.
The production will use a 2011 translation by James Scully. “Unlike a lot of Greek translations, [Scully’s] is very conversational. It feels like 21st century dialogue. It’s a much more contemporary flavor,” says Hackey.

Complementing the digestible translation are the directorial talents of Tom Gleadow, an actor who admires the immortally relevant messages of Greek tragedy but not the goofy Greco-roman posturing that’s usually part of the package. “If I had to sit and watch a Greek play with togas, an actual Greek play — when the lights come up, I’d be hanging from the ceiling. [We have] to make it contemporary so that we get the point across,” says Gleadow.

Hackey and Gleadow held auditions, a disappointing venture that only produced one cast member. Gleadow sourced the rest of the cast from his college buddies: “I never graduated from college, so in 2011 I went back and finished my undergrad…I met most of [the cast] then,” he says.

This reader’s theater rendition of “Ajax” won’t be lifeless. There will be costumes (Ajax in fatigues, Greek leaders in suits) and movement. A rehearsal demonstrated the vitality and force of the the young cast (actors “in the process of becoming professional,” say Hackey and Gleadow). Their words sounded leaden with power.

“Ajax” arrives at a fertile time for reconsidering the tolls of battle. In 2013, there were 301 suicides in the army. The US Department of Veterans Affairs estimates that post-traumatic stress disorder affects up to 20 percent of American vets. While these numbers are minuscule compared to the number of Iraqis killed, they illustrate that neither party escapes unscathed. Says Hackey, “[Tragedies] often raise issues of who’s in control. A lot of vets feel out of control, not necessarily fully in charge of their own destiny.”
In the introduction to his translation, Scully argues that “Ajax” is not “what a modern audience viewing tragedy through a generalized Aristotelian lens would be looking for — but a different kind of experience: a fundamentally civic, political, ethos-challenging drama.”

“Ajax” shows us that war and the logic of heroism supporting it come at a price. Dead Trojans, dead Greeks: the loser is bankrupt of life, and the winner — relinquishing the life instinct, genuflecting to death — is bankrupt of anything that makes life worth living. As the chorus says to Ajax’s concubine, Tekmessa: “Lady, grief on grief is worse.”