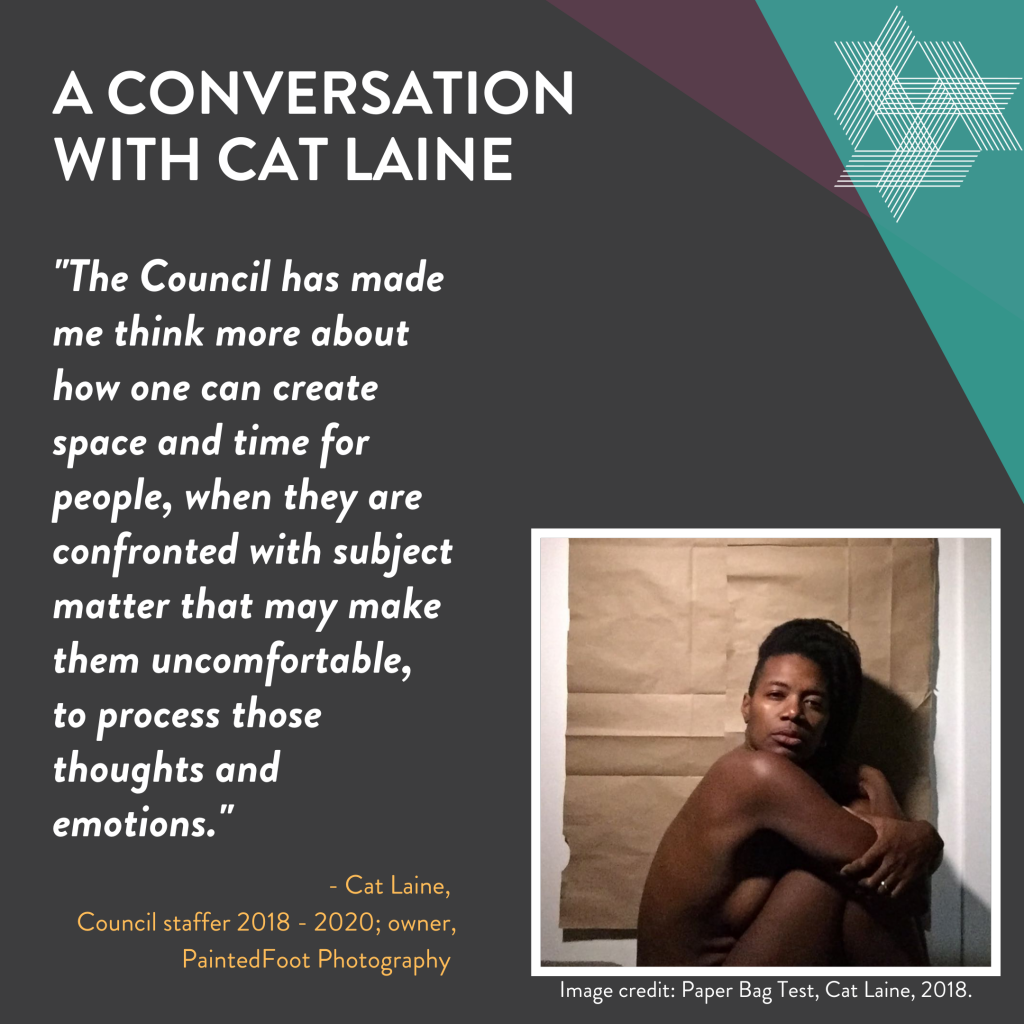 July 10, 2020 — In 2018, Cat Laine joined the Humanities Council team as Program Coordinator supporting all aspects of the organization’s grantmaking, development, communications, and operations. This month, she will conclude her time at the Council, transitioning to focus full time on her photography practice. Cat’s contributions to the organization cannot be overstated. Her keen eye for detail, dedication to collaboration, and creative spirit will truly be missed. Luckily for us, she’s not going far and will remain in Rhode Island as she builds her business. Visit www.paintedfoot.com or follow Cat on Instagram @paintedfoot for more about Cat’s photography and read on for her reflections about the Council’s work and role in Rhode Island’s cultural ecosystem.

A conversation with Cat Laine:

What attracted you to the Council in the first place and what have you found rewarding about your role?

In Dante’s Inferno, the fifth circle of hell is said to be a vast swamp where the wrathful and sullen are punished. Since the 2016 election, that is where I feel I’ve spent everyday, seething with fury while trying to maintain an outward facade of pleasant agreeability. Anger can be a constructive emotion as it can push one out of an ambivalent stasis, but it must be channeled fairly quickly into positive action before it curdles into its more destructive aspects.

In 2018, I was feeling myself on that knife’s edge and was looking for an organization that could contain the roiling energy of my anger and calmly turn it into good works. I was looking for somewhere that concerned itself of social cohesion, dialogue, and democracy, but that saw that cultural equity and real inclusion were key to making a multi-racial, muti-ethnic, multi-cultural community function.

The Council seeks to help construct a cohesive peaceful democracy through diversity, empathy, and understanding, rather than a democracy through assimilation and erasure. The Council celebrates the idea that true participation in a democracy does not require people to shed their identities like cast off skin, but instead calls on people to bring their full selves to bear to make their communities, country, and world better.

In your role as Program Coordinator, how have you seen the Council make an impact on Rhode Islanders?

I’ve been most moved by how the Council conceives of grant giving and how it feels very different from other philanthropic organizations I’ve been exposed to. The Council’s grants, funded in large part by the people’s money, go to support the people. Not just the people who are the best grant writers at any given point in time, not just the people who fit a narrow definition of humanities work as defined by academes, but the people writ large. What’s been fascinating to me is the sheer amount of work, stewardship, and mentorship it takes to actually serve all Rhode Islanders. It’s still a work in progress, but we’re always pushing, pushing, pushing to expand who’s invited to the table and make democracy more democratic.

Have you seen the Council evolve over the past few years and if so, how does that translate to work with grantees?

I feel that the Council takes great care in not making its grant procedures hoop jumping tedium, but actually asks questions that will lead to better, more well thought out projects and stronger organizations. Even those who do not make the cut in a grantmaking cycle are given a strong debrief and advice. The Council’s goal is not to concentrate its funding into the few grantees that know the ropes, but to expand who can participate and who is served by the programming.

A big thing I’ve noticed is how the Council understands that it is in a position of power because it holds the purse strings, but works very hard a) to not abuse that power dynamic and b) to use its position for the benefit of all.

I feel that there is more clarity about how the dollars granted by the Council and its imprimatur of legitimacy can be an amplifier for smaller organizations. Because the amount of money we can give is limited, we are always looking for other ways to invest in people, organizations and the community. One is by bringing people to the table who needed to be there, but who weren’t extended the invitation that they deserved.

Because of the Council’s funding and support, when the big problems of the day arise, the diverse people in the community who are doing solid humanities work can be ready (or at least more ready to respond than they might otherwise be). Two good examples are Pushed Learning’s newest mini doc on police violence, mass incarceration, and its effect on students in Providence public schools and Rhode Island Latino Arts’ video homage to Latinx essential workers in Rhode Island helping us all during the COVID-19 pandemic. I appreciate how the Council has been funding the people who can conceptualize this moment for a while already.

Are there lessons from your time at the Council that will impact your photography practice?

There is one in particular. My commercial photography work tends to be very empathetic, calming, and inviting. The work that I want to create for myself will likely tend to be more challenging, hopefully a bit more unsettling, though not necessarily confrontational. The Council has made me think more about how one can create space and time for people, when they are confronted with subject matter that may make them uncomfortable, to process those thoughts and emotions. Not everyone is going to be ready to take in and deal with a newly presented reality, and there is a question of how much or how little one makes accommodations for that.

In keeping with that, when Rachael asked me to pick a photo to accompany this interview I chose a self-portrait entitled “Paper Bag Test” because it is one of the few pieces I’ve created where my art converses more directly with history. According to Wikipedia, the Paper Bag Test “in African-American oral history was a form of racial discrimination practiced within the African-American community in the 20th century, by comparing an individual’s skin tone to the color of a brown paper bag. The test was allegedly used as a way to determine whether or not an individual could have certain privileges; only those with a skin color that matched or was lighter than a brown paper bag were allowed admission or membership privileges.” The photo is of me vulnerable, in full acknowledgement of the nation’s history, the metastatic systems of racism and misogyny in which I reside, but defiant, proud, and as Whoopi Goldberg’s Miss Celie says in The Color Purple “dear God, I’m here”!

What are you most excited about for the year to come?

Cat’s last day at the Humanities Council is July 10, 2020. If you would like to share well wishes, please direct them to rachael@rihumanities.org and we will ensure they reach her promptly.