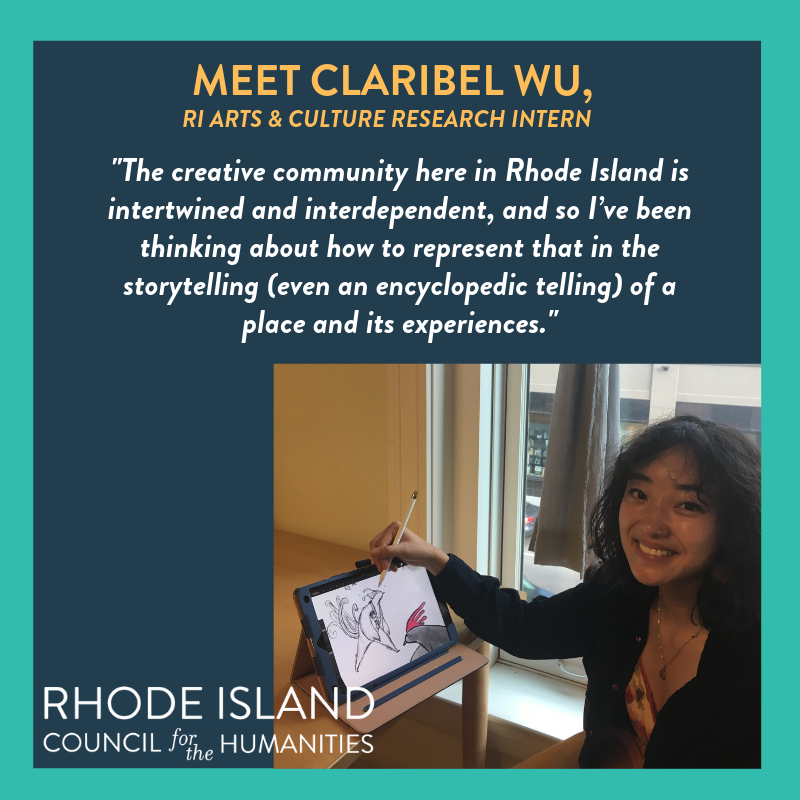 In this series from the Rhode Island Council for the Humanities, we take a deeper dive into what it really means to Catalyze Culture: to mobilize cultural participation, production, and partnership for innovation, deeper knowledge and engagement, and tackling civic challenges. The Council does this in a variety of ways, through our grants and partnerships as well as through our new RI Arts & Culture Fellowship. To kick off the series, read on for insights from Fellow Janaya Kizzie as she reflects on how we tell the stories of Rhode Island’s artists and cultural leaders and the frameworks that help drive this research and writing.

“Downtown Providence has numerous 19th-century mercantile buildings in the Federal and Victorian architectural styles, as well as several post-modern and modernist buildings that are located throughout this area. In particular, a fairly clear spatial separation appears between the areas of pre-1980s development and post-1980s development. Fountain Street and Exchange Terrace serve as rough boundaries between the two.”

Reading that paragraph of text is almost entirely unlike the experience of walking through downtown Providence and being among the buildings; it is necessarily devoid of the people, sounds, smells, and even many of the sights of downtown. Similarly, the story of Rhode Island arts and culture is more than a collection of facts in sequence. A memory can’t be cited well, and the connections between people are more complex than hyperlinks. Encyclopedias and wikis rely on brevity and generalizations; they simplify reality. My project–to document Rhode Island’s creative culture on Wikipedia—while complex in its scope and broad in coverage, cannot tell a rich, sensory, human story; it can only, like any encyclopedia, provide access to knowledge and foster exploration. That is why I’m so glad to have Claribel Wu, as the Rhode Island Arts and Culture Research Intern; her work this summer will seek to further that exploration.

Wu, who is an artist, filmmaker, writer and recent graduate from Brown University, started at the Humanities Council in June with an intensive two weeks doing research on Rhode Island, Wikipedia, and social practice art. She impressed us with her understanding of community organizations, her interest in telling stories about people, and her curiosity about research.

When choosing the direction for her project this summer, it was the stories Wikipedia can’t tell that appealed to her most as a storyteller and an artist. Wu’s project will be two-fold; she’ll create an illustrated, hyperlinked introduction to Rhode Island arts and culture as it exists on Wikipedia, and she’ll plan a public event that helps train people in writing for Wikipedia while getting them to connect outside of the digital world.

Wu hopes the illustrated guide will inspire people to contribute their words and research to Rhode Island’s presence on Wikipedia. The guide will include a list of stubs—shorter, underdeveloped articles about Rhode Island—to get people interested. Her influences include the artist’s guide to Wikipedia, How to be included on Wikipedia, by writer Amber Berson with illustrations by Dean Sudarsky, and work being done by Providence Public Library to integrate art and academic work, such as their comic guide to artists using special collections, Lizard Ramone: In Hot Pursuit.

For the public training session, Wu will be taking inspiration from social practice work and her own work as a Storyteller For Good at Brown’s Swearer Center. She seeks to give physical gravity to ephemeral connections using Wikipedia as the catalyst: “I’m interested in a dedicated space for uplifting synchronicity, noticed moments of connection. The creative community here in Rhode Island is intertwined and interdependent, and so I’ve been thinking about how to represent that in the storytelling (even an encyclopedic telling) of a place and its experiences.”

Wu will continue developing the project throughout the month of July, including meeting with at least one arts organization to learn more about networking and connections between artists. I look forward to reporting on the results here!