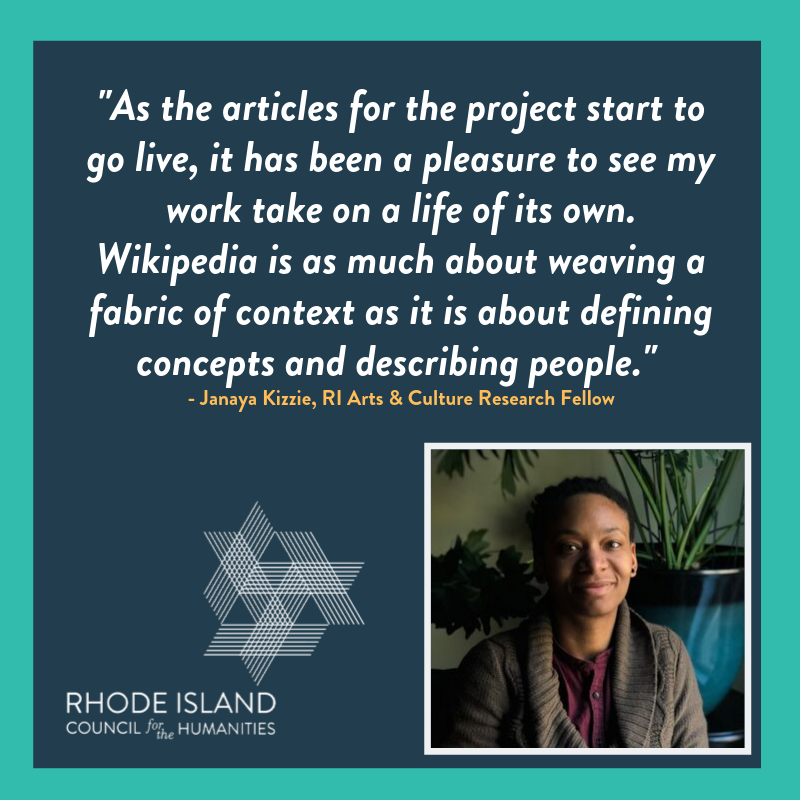 In this series from the Rhode Island Council for the Humanities, we take a deeper dive into what it really means to Catalyze Culture: to mobilize cultural participation, production, and partnership for innovation, deeper knowledge and engagement, and tackling civic challenges. The Council does this in a variety of ways, through our grants and partnerships as well as through our new RI Arts & Culture Fellowship. In celebration of October being National Arts & Humanities Month, read on for insights from Fellow Janaya Kizzie as she reflects on how we tell the stories of Rhode Island’s artists and cultural leaders and the frameworks that help drive this research and writing.

As the articles for the project start to go live, it has been a pleasure to see my work take on a life of its own. Wikipedia is as much about weaving a fabric of context as it is about defining concepts and describing people. Each edit I make and article I write has a fascinating intersection with the culture of and functions of Wikipedia.

Every Wikipedia article must lead to another article, and articles that are not connected to any other Wikipedia article are described as “orphans.” Because relationality is so essential to Wikipedia, writers are encouraged to make connections between articles and give orphans their proper context within a subject.

As I’ve been writing articles, clusters–independent of the conceptual clusters I generated to help determine the articles I write–began to form. Articles that I decided to write independently became linked to one another because their stories are linked together. A few examples:

Museum curator and artist J.R. Uretsky serves on the Public Projects Board of Trustees of arts space Dirt Palace, which displayed an award-winning installation by artist and arts educator Dana Heng.

Civil rights advocates Andrew J. Bell, Jr. and William Wiley were founding members of the Providence Urban League and, while I haven’t found a citation for this, it is likely that Wiley worked at Bell’s funeral home.

Some of these articles would have been orphans, or close to it, without the other. The interconnectedness, while sometimes unknown to me when I started writing, has been an essential part of the composition of each article. As a result, I’ve found that sometimes it’s made sense to post multiple articles simultaneously so that set of connections arrives intact.

Another fascinating part of the project has been the connections made by other Wikipedians, and, more frequently, their bots. Bots are a kind of program meant to do many of the rote tasks on Wikipedia.

Bots have, within seconds, added my new articles to categories so that they can more easily be found by people researching by topics I might not have identified.

In one instance, Margaret F. Ackroyd was added to the Births in 1908 category, putting her in the same category as Lyndon B. Johnson and Jimmy Stewart.

Further, articles like Rhode Island Pride were added to Wikidata another Wikimedia Foundation project used to share tagged structured data. That data will be used by organizations like the Library of Congress to deepen their own knowledge bases and make further connections.

While surveying the arts and culture landscape of Rhode Island broadly and granularly, I’ve noticed the deep interconnectedness between place, people and organizations. No one artist or cultural leader I’ve written about has simply been “from” Rhode Island and existed without the vibrant arts and cultural communities having an effect on their work.

What has been repeatedly surprising, though not at all uncommon, is that many of these influencers still are not yet on Wikipedia. I make a point of it to add them to my list before red-linking them within each article I write.

Red-links on Wikipedia are a dead-end link, that is, a link to a page that doesn’t exist but should. The practice of red-linking has become a phenomenon and a rallying cry for some in the Wikipedia community. For example, the WikiProject Women in Red seeks to “turn women blue” (and ease the gender disparities on Wikipedia) by writing articles for the many red-linked women. I’ve found at least 20 potential articles by reading Women In Red’s to-do list. Similarly, there is still much to be done to make the Rhode Island on Wikipedia reflect Rhode Island in reality. A red-link is an open door, inviting the Wikipedia community, and the world, to continue exploring.

In honor of October being National Arts & Humanities Month, the Humanities Council and the RISCA will be sharing selected arts and culture profiles created as part of this fellowship as I continue to research, write, collect and connect stories of significant visual artists, performers, and writers past and present who have lived in Rhode Island to inform and inspire.

Follow along on social media @rihumanities and @RIArtsCouncil using the hashtag #artsANDhumanitiesRI as we share new articles throughout the month of October.