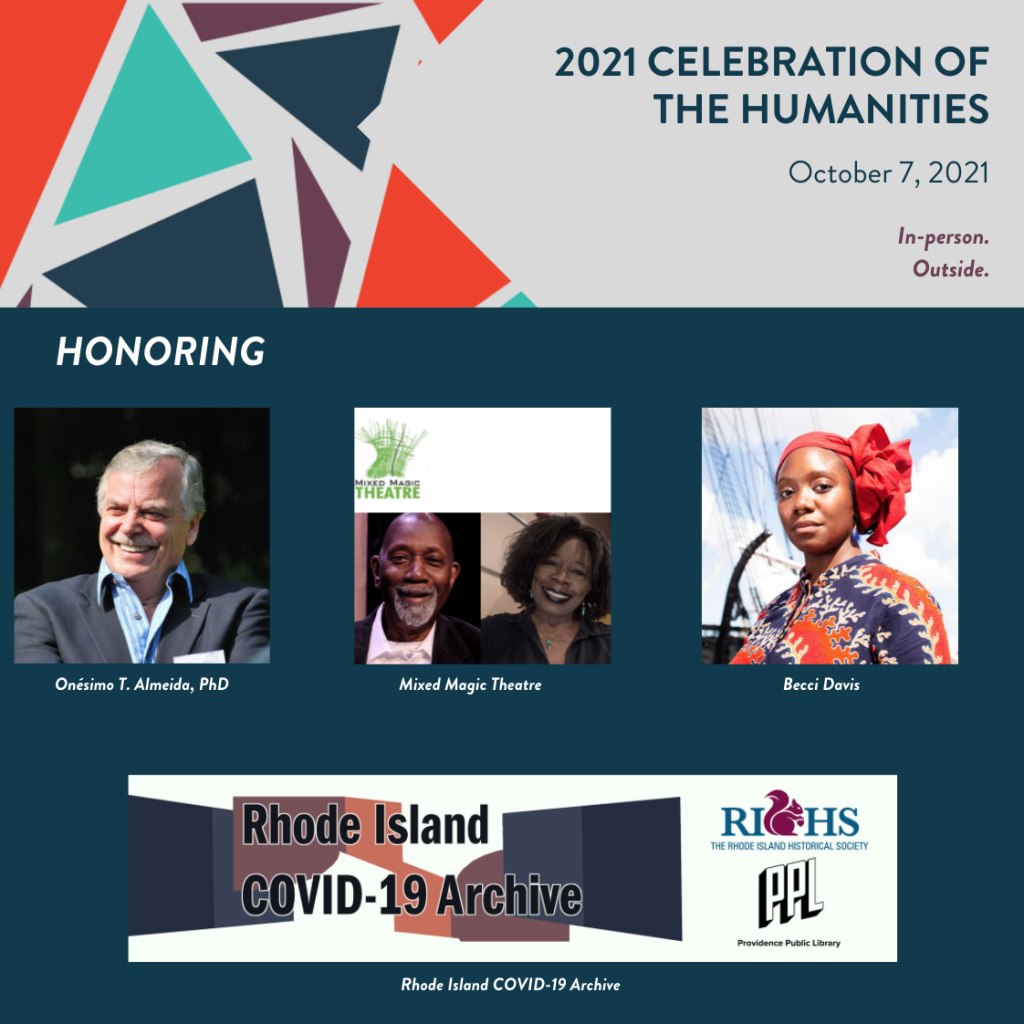 Onésimo T. Almeida, PhD, a scholar, educator, and civic leader, will receive the Honorary Chairs’ Award for Lifetime Achievement in the Humanities. Mixed Magic Theatre, a company with a deep legacy of bringing diverse stories to the stage with the mission of building more literate and arts-active communities, will be awarded the Tom Roberts Prize for Creative Achievement in the Humanities. The Innovation in the Humanities Award will be presented to the Rhode Island COVID-19 Archive, a crowdsourced, public digital archive created and maintained by the Providence Public Library and the Rhode Island Historical Society to document the lived experience of all Rhode Islanders during the COVID-19 pandemic. Becci Davis, an artist and scholar whose work engages issues of memory, commemoration, memorialization, and race will receive the Public Humanities Scholar Award.

“Throughout the 2020-2021 COVID-19 pandemic, communities across the country have grappled with isolation and have confronted complex conversations about race, equity, and justice. The humanities catalyze civic engagement with this transformational moment—they serve as a beacon of hope,” said Elizabeth Francis, executive director of the Humanities Council. “This year’s Celebration honorees represent communities across the state collecting our stories, adapting practices, strengthening heritage, and sparking ongoing conversations about commemoration and legacy.”

This year the Council will return to an in-person Celebration on Thursday, October 7, 2021 at the Steel Yard in Providence, RI with a virtual program airing later in October. This hybrid approach will reconvene the humanities community while also ensuring access by bringing this year’s honorees together in conversation through the virtual program that will be free and open to the public.

Opportunities for sponsorships, program ads, and tickets are now available. Proceeds benefit public history, cultural heritage, civic education, and community engagement by and for all Rhode Islanders. Sponsorship levels and benefits are detailed online at rihumanities.org/get-involved/celebrate. For more information call 401-273-2250 or e-mail rachael@rihumanities.org.

About the Rhode Island Council for the Humanities

The Rhode Island Council for the Humanities seeds, supports, and strengthens public history, cultural heritage, civic education, and community engagement by and for all Rhode Islanders. As an independent, nonprofit affiliate of the National Endowment for the Humanities, the Council catalyzes public humanities partnerships and initiatives and has provided over $8 million in grants to support more than 650 organizations as well as independent researchers and filmmakers throughout the state of Rhode Island since its founding in 1973.

Award descriptions are below. For more information, contact Rachael Jeffers at rachael@rihumanities.org or (401) 273-2250 x205.

The Lifetime Achievement Award celebrates career achievements that demonstrate humanities excellence, reflect the Council’s mission and core values, and enrich public life in Rhode Island. Onésimo T. Almeida, PhD, is known worldwide for his knowledge and promotion of Portuguese culture and heritage. Born in the Azores, Almeida graduated from the Portuguese Catholic University, Lisbon in 1972. He earned his MA and PhD in Philosophy from Brown University. Since 1975, Almeida has served as a professor in Brown University’s Department of Portuguese and Brazilian Studies; as chair for over a decade. Almeida has authored and edited numerous books and published several hundred essays in academic journals, newspapers, and other periodicals. The recipient of various awards, Almeida was honored by the President of Portugal in 2019 with the prestigious Grã-Cruz of the Prince Henry Order. He was elected to the Academia da Marinha (Lisbon) and to the Portuguese Academy of Sciences and has received an Honorary Degree from the University of Aveiro, Portugal.

Almeida has also led courses for hundreds of legal residents seeking to become United States citizens. Since 1979, he has been the host of a bi-monthly socio-cultural talk show (Daqui e da Gente) on the Portuguese TV Channel, broadcast in Rhode Island and Southeastern Massachusetts. Guests have included scholars, elected and appointed officials from Portugal and the United States, and local community leaders and activists to share their works and civic engagement projects.

Almeida was a member of the Board of the Council for the Humanities from 1995 to 2001, and its Vice-Chair from 1998 to 2000. He is a respected leader in the academy and in Portuguese communities with deep roots across Rhode Island and Southeastern Massachusetts.

The Tom Roberts Prize celebrates creativity in topics, disciplines, and formats that extend the field of the humanities. This year’s Prize honors Mixed Magic Theatre, a company with a deep legacy of bringing  diverse stories to the stage with the mission of building more literate and arts-active communities.

Mixed Magic Theatre was founded over 20 years ago by husband and wife Ricardo Pitts-Wiley an actor, playwright, composer, and director and Bernadet Pitts-Wiley an actress, poet, and activist for theatre, arts, and education. The Pawtucket, RI-based company operates under the “First think diverse” mindset—ensuring that inclusion is a priority instead of an afterthought.

Under the leadership of Artistic Director Jonathan Pitts-Wiley, Mixed Magic Theatre continues to pursue theatrical excellence by producing a wide range of contemporary and classic works including critically acclaimed productions of plays by August Wilson to William Shakespeare, Yasmin Reza to Zora Neal Hurston and many more. Mixed Magic Theatre is also well known for their development and staging of adaptations of novels and classic literature including Moby Dick: Then and Now.

Over the years the Humanities Council has awarded multiple grants to Mixed Magic Theatre. Most recently, the company received a grant through the Council’s XIX: Shall Not Be Denied: Why It Matters initiative for their We, They, And The People virtual performance series which adapted historic Supreme Court cases for dramatic readings followed by conversations with civic leaders around topics of voting, representation, and civic engagement.

Mixed Magic Theatre is committed to incorporating new technology and media into their practice. The company prides itself on creating a welcoming environment for artists to develop their skills and to be a part of the world, believing that art and artistic expression is as vital to human well-being as food, water, clothing, and shelter. Born out of the Black-American experience, Mixed Magic Theatre understands that it is not just in the business of shows, but the lifesaving business too.

Recognizing the innovative implementation of the humanities by an organization or a collaborative partnership between organizations to achieve a specific goal, this year’s Innovation in the Humanities Award is presented to the Rhode Island COVID-19 Archive, a crowdsourced, public digital archive created and maintained by the Providence Public Library (PPL) and the Rhode Island Historical Society (RIHS) to document the lived experience of all Rhode Islanders during the COVID-19 pandemic. The project aims to build an archival resource that helps Rhode Island reflect on life during COVID-19 through the means of inclusive storytelling. The project is managed by Kate Wells, Curator of Rhode Island Collections at PPL, and Becca Bender, Curator and Archivist of Moving Image and Audio Collections at RIHS. The Rhode Island COVID-19 Archive collaborators launched the project at the start of the pandemic in 2020, believing that every person in our community has something of value to contribute to this documented history, and that communities are empowered by telling our many stories— especially those that may be otherwise lost, obscured, or ignored in news media accounts, press releases, and government advisories. Learn more and explore the thousands of items submitted to the archive at: ricovidarchive.org.

The Rhode Island COVID-19 Archive was supported by a Humanities in the Age of Social Distancing Project Grant made possible through funding from the CARES Act.

The Scholar Award recognizes outstanding public humanities work in teaching and scholarship that advances the civic and cultural life of Rhode Island. This year’s Award honors Becci Davis, an artist and scholar whose work engages with issues of memory, commemoration, memorialization, and race. Davis’ work speaks to the African American experience and the ongoing reality of white supremacy, drawing inspiration from nature, place, and her personal experiences as the descendant of slaves and those who enslaved.

Davis was born on a military installation in Georgia named after General Henry L. Benning of the Confederate States Army. Her birth initiated her family’s first generation after the Civil Rights Act and its fifth generation post-Emancipation. As a Rhode Island-based visual artist who works across disciplines, Davis finds inspiration in studying the past, exploring landscapes, documenting her family’s stories, and recording her experiences as a daughter, mother, American, and Southern born and raised, queer Black woman.

Davis holds an MFA from Lesley University and has earned fellowships from the RISD Museum, Providence Public Library, and RI State Council on the Arts, among others. She teaches art at Brown University and Mount Holyoke College and is a member of the WARP Collective studio in the historic Atlantic Mill in Providence and is active in the AS220 and Dirt Palace Public Projects communities.