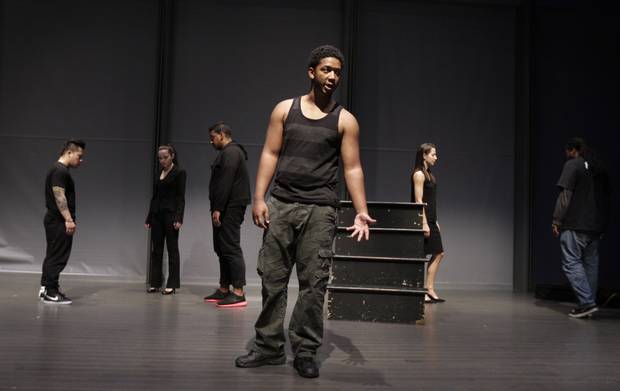 The stories spoke of broken families, lost dreams, early deaths. They also spoke of a criminal justice system that sometimes seems at odds with the idea of providing justice. And then there were the stories focused on children. A boy who jumps up to protect his mother when she is hit by her boyfriend, only to be scolded. A boy who wonders when his father will come home. A young man, surrounded by violence, who dies in his mother’s arms.

The stories come from an “in progress” showing of the Everett Company, Stage and School’s “Freedom Project,” which mixes dance, poetry, music, singing and acting to share “stories of people who have been marginalized by America’s criminal justice system.”

Saturday’s one-hour performance at Brown University’s Granoff Center for the Arts featured true stories — including a few that were told by company members who had lived them. For the 50 or so people who attended, it was a presentation that took the spotlight away from the idea of keeping criminals off the streets and put it on firsthand accounts of the pain of living in poverty, in broken homes, and growing up in a world where the pain that carries over into adulthood and often leads to prison.

Some of the skits were mere monologues, others were group efforts. Some were accompanied by a stand up bass or an acoustic guitar. But the theme was consistent.

“Every time I try to get a good job, because I’ve got my GED now, they just look at my record and they say no,” one presenter said. Another recalled: “My father stole me from my mother when I was a baby. He didn’t think that she was fit to raise me.” He was beaten by his father’s girlfriend. Then, at 7, he went to live with his mother. “She beat me, too,” he said.

There were many more moves, and then, disillusionment.

“I just thought, what is the point of being good, or making friends.” The boy who tries to defend his mother from her boyfriend winds up in the system. “You’ve got two choices” he is told. “Foster care or a group home.”

A teacher describes how she used to be a good teacher. But now, with more and more mandates, she can’t teach the way she used to teach. And she still has to deal with the problem kids. “You discipline, you discipline, you kick him out of the class. And then that starts the whole cycle,” she said. “Where does it end?”

Everett, a self-described “multidisciplinary performance arts incubator” on Duncan Avenue in Providence, will formally premier its “Freedom Project” next March, said Aaron Jungels, one of the company’s artistic directors. Some individual pieces have been performed publicly at the company’s “brain cafés,” which allow for informal showings of the company’s work, but Saturday’s performance was the first in which all the pieces were performed in one sitting, Jungels said.