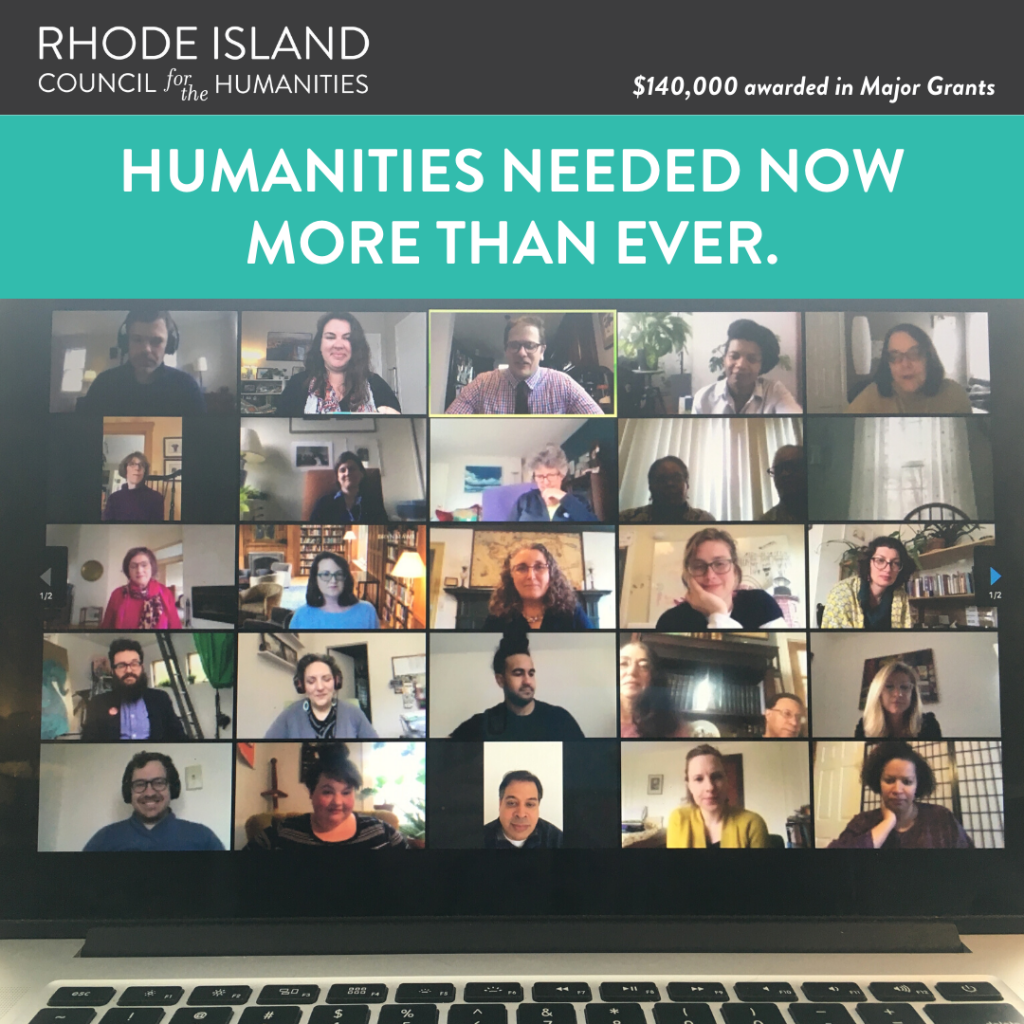 May 1, 2020 – On Thursday, April 30, 2020 the Rhode Island Council for the Humanities hosted a virtual gathering for representatives from civic and cultural organizations around Rhode Island and announced a total of $140,000 in new grants for 15 humanities initiatives across the state. The announcement recognized Rhode Island’s remarkable humanities community and the role the humanities play in strengthening our democracy and enriching our culture.

Video messages from Senator Jack Reed, Senator Sheldon Whitehouse, Congressman David Cicilline, and Congressman James Langevin all highlighted the power of the humanities to bring people together, especially in times of crisis, and congratulated this year’s grant recipients. Their continued support and leadership helped to bring $840,000 to Rhode Island in relief funds from the National Endowments for the Humanities and Arts. To find out more about the new relief grant program, visit the Council’s website: rihumanities.org.

“Especially during this crisis, the Humanities Council staff and board are committed to supporting our cultural community. We are truly proud to be part of Rhode Island’s cultural ecosystem. Though we know that the 2020 grant projects will grow and change as a result of the pandemic, we’re here to support grantees through that process of imagining what forms the public humanities will take in this moment of social distancing,” said Elizabeth Francis, Executive Director.

Short video clips from many of the 2020 major grantees and the Congressional delegation are available here on the Humanities Council’s website (below) and on the Council’s social media channels @rihumanities as we continue to celebrate and advocate for the role of public humanities in our civic life. Watch the Council’s website and calendar for updated information about grantee events in the coming months.

The Rhode Island Council for the Humanities seeds, supports, and strengthens public history, cultural heritage, civic education, and community engagement by and for all Rhode Islanders. As the only dedicated source of funding for public humanities in Rhode Island, we are proud to support museums, libraries, historic sites, schools, preservation and historical societies, community and cultural organizations, individual researchers and documentary filmmakers to bring Rhode Island’s stories to life and to amplify the state’s many diverse voices. A private nonprofit 501(c)3 organization, the Council is supported by federal funds from the National Endowment for the Humanities as well as by individuals, corporations, and foundations. Visit www.rihumanities.org for more information.

Read on for a full list of this year’s major grant projects.

Public Projects
In support of organizations and projects that enrich and enliven the life of our state through public humanities programs.

$12,000, International Tennis Hall of Fame, In Your Court: Black Tennis and Social Justice Then and Now.
Project connecting students in Newport to the history of sport and race in the United States. Working with Rhode Island Black Storytellers and local teachers, the Hall of Fame will expand its current K-12 educational offerings, centering lessons around storytelling and performance.

$12,000, Little Compton Historical Society, Little Compton Women’s History Project.
Digital archiving project that captures and preserves the stories, life, and impact of Little Compton’s women from the 17th Century through today. The project results in an exhibit, digital archive, and public program series that shares the stories of diverse women who have made a lasting impact on the town, both big and small.

$12,000, Preserve Rhode Island, Doors Open Providence 2020 Festival Programming.
Day-long festival connecting Rhode Island and regional audiences to the built and cultural landscape of greater Providence. Throughout the festival, 30 unique sites across the capital city are open for the public to visit, tour, learn, and experience.

$12,000, Pushed Learning and Media, Curriculum Development and Long-Term Planning in PPSD Amidst RI State Takeover.
School visits that connect students with performers and educators who utilize hip hop as a pathway to understanding the state’s economic, racial, and cultural divisions. Performances, individual classroom visits, and documentary videos center the value of civic-learning during the state takeover of Providence public schools.

$5,000, Rhode Island Urban Debate League, Centering Equity and Access in Urban Debates.
Assessment and alteration of RI Urban Debate League’s curriculum and educational materials. Using a lens of equity, the League will enhance educational practices that maintain the knowledge and skill-based outcomes of debate, while ensuring relevance and accessibility to diverse students.

$9,200, School One, Write Rhode Island (2020).
Statewide creative writing competition for Rhode Island students in grades 7-12. As part of the contest, free workshops in community libraries across the state and an intensive summer course connect educators and writers with participating students. Winning students’ works are published in a professional anthology.

$3,900, South County History Center, A New Perspective on New Deal Mural “Economic Activities of the Narragansett Planters.”
Development of a new exhibit exploring the meaning and interpretation of Ernest Hamlin Baker’s New Deal mural “The Economic Activities of the Narragansett Planters.” The mural depicts Colonial-Era agricultural work in South County, including the labor of enslaved peoples.

$8,257, Stages of Freedom, A Mighty Roar: Frederick Douglass and the Quest for Black Citizenship in Rhode Island.
Program series connecting the public and K-12 students with the history and impact of Frederick Douglass both in the Ocean State and on our nation. Through performances and lectures, the series prompts audiences to consider the American values of freedom, self-determination, and civic participation.

$4,743, Trinity Repertory Company, Context and Conversation.
Community conversations co-produced by Trinity Rep and the Providence Public Library. The series connects scholars, artists, and community practitioners in conversation about the varied and diverse themes brought up by the plays performed during Trinity’s 2020-21 season.

DOCUMENTARY FILM
In support of documentary films that preserve Rhode Island’s stories and bring its history to life.

$10,000, African Alliance of Rhode Island, The Seed Keepers: Sustaining Ethnic Food Traditions in a New Land.
Production of a 30-minute documentary film that captures the essence of community farmers markets in South Providence, emphasizing the diversity of food heritage and culture in the neighborhood. In addition to food vendors, the markets feature cultural performances and conversation.

$12,000, Center for Independent Documentary, Blood and Watershed (2020).
Production-phase of a documentary film exploring the creation of the Scituate Reservoir and its current role as Rhode Island’s largest freshwater resource. The film examines the multidimensional role and impact of the Reservoir on Rhode Island culture, economics, infrastructure and citizens’ sense of civic agency.