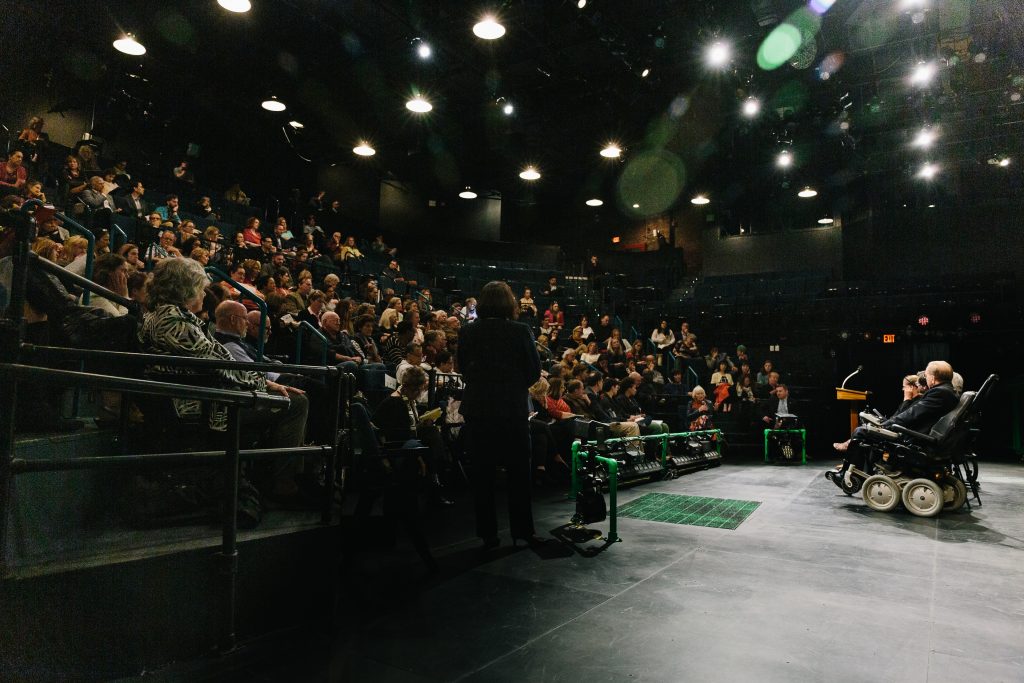 Providence, RI — On Monday, May 6, 2019, hundreds of Rhode Islanders welcomed National Endowment for the Humanities (NEH) Chairman Jon Parrish Peede and National Endowment for the Arts (NEA) Chair Mary Anne Carter to a Cultural Conversation at Trinity Rep in Providence. Hosted by the Rhode Island Council for the Humanities and the Rhode Island State Council on the Arts, the third Cultural Conversation convened RI’s Congressional delegation with the state’s cultural leaders. The event highlighted the vital importance of the arts and humanities in cultivating civically engaged communities.

The conversation centered around the importance of cultural participation in weaving together a civic fabric that enhances our democracy. Chairman Peede remarked, as did all the other speakers, on the inspiring legacy of the late Senator Claiborne Pell of Rhode Island, who championed and helped author the founding legislation of the Endowments in 1965. Quoting the legislation, Chairman Peede noted, “The starting words of this legislation guide my entire chairmanship, ‘Democracy demands wisdom and vision in its citizens. It must therefore foster and support a form of education, and access to the arts and the humanities, designed to make people of all backgrounds and wherever located masters of their technology and not its unthinking servants.'” In reference to the pace of technological advancement and current debates around the use and abuse of technological tools, Chairman Peede noted that both Endowments are looking at ways that these advancements should be rooted in the principles of empathy and ethical reasoning brought forth through the arts and humanities. A full video of the Cultural conversation can be found on the Humanities Council’s Facebook page.

Thank you to the hundreds of people who joined us at Cultural Conversation and to Dr. Mark Santow, Director, The Providence Clemente Veterans’ Initiative and Sokeo Ros, Co-Artistic Director and Director of Hip-Hop Programs at Everett for sharing inspired stories of the impact of federal and local support for the humanities and arts in our communities.

Following the Cultural Conversation, the chairs visited the RISD Museum for a private tour of the Museum’s new exhibit, Gorham: Designing Brilliance 1850-1970—supported by the National Endowment for the Arts and a 2018 grant from the Rhode Island Council for the Humanities. A luncheon hosted by Rhode Island School of Design President Rosanne Somerson and RISD Museum Director John Smith followed the tour. The Gorham exhibit is on view at the RISD Museum May 3 – December 1, 2019.

Later in the afternoon, Chairman Peede met with Jack Martin, Executive Director of the Providence Public Library for a behind-the-scenes look at renovations of their downtown Providence cultural landmark. The PPL received received a $450,000 grant from the National Endowment for the Humanities through its new Infrastructure and Capacity-Building Challenge grant program—designed to support projects that preserve culturally significant works and modernize for the future.

As Chairman Peede has stated in the past, “the humanities are not a luxury, rather the humanities are what bind us together in our common journey.” Special thanks to the Rhode Island Congressional delegation, including Senator Jack Reed, Senator Sheldon Whitehouse, Congressman Jim Langevin, and Congressman David Cicilline (who met with the Chairs separately during their visit to Rhode Island) for participating in these important conversations and their dedication to protecting funding for the National Endowments for the Arts and Humanities.

See below for additional photos of the NEH and NEA visit.
Photo credit: Cat Laine.