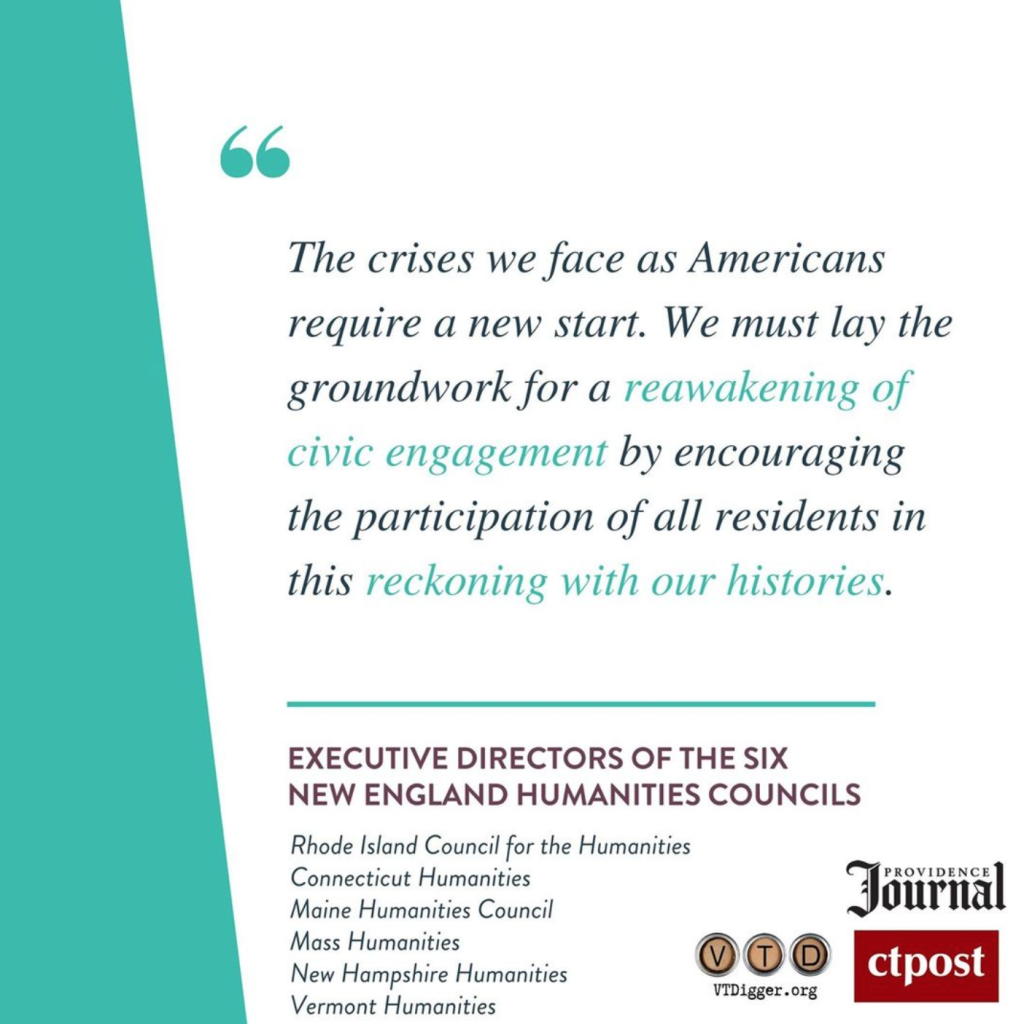 The horrific events at the U.S. Capitol on Jan. 6 gave way to an impromptu history class for the American public. When Congress resumed its proceedings, multiple senators and representatives took pains to cite other events in our history when the nation beat back the terrors of mob violence. Republicans and Democrats alike took turns offering their interpretations of the War of 1812, the Civil War, Reconstruction and the Civil Rights movement. History, they told us, should be our beacon during this dark moment.

As leaders of state humanities councils in New England, we embrace this approach to reinvigorating our democracy. The crises we face as Americans require a new start. We must lay the groundwork for a reawakening of civic engagement by encouraging the participation of all residents in this reckoning with our histories.

The rebuilding of America can begin in the public spaces dedicated to learning — libraries, community centers, local museums and historic sites. The national conversation about our past and future should be robust, multilingual and ongoing. The Biden administration and the 117th Congress can catalyze this national conversation by significantly increasing funding for the National Endowment for the Humanities.

Humanities councils in 55 states and territories serve as local affiliates for the NEH, which also supports scholarship and research. Our organizations receive base grants each year from the NEH. The founding legislation for the NEH states boldly: “Democracy demands wisdom.” The state councils create access to the humanities for the public, providing grants and programs that nurture the wisdom that exists in communities.

We support literacy programs and documentary films, public discussions about race and the environment, educational opportunities for underserved communities and websites that guide students through the histories of our states.

Responding to the impact of the pandemic, our organizations distributed $2.6 million in emergency grants to more than 490 New England nonprofits, part of $75 million awarded by the NEH through funding made possible by the CARES Act.

The humanities contributed indelibly to last year’s national reckoning over racial justice. As people of all backgrounds took to the streets to protest police brutality, they asked for justice, not only for George Floyd and Breonna Taylor, but for their enslaved and indigenous ancestors. Residents across New England turned their attention to the monuments in our town squares, inquiring about the individuals we honor and the systems that oppress us.

These questions cause discomfort among neighbors, but these differences need not harden into pitched battles, much less the waving of the Confederate flag in the Capitol rotunda. We need increased support for public humanities institutions and programs, which regularly convene neighbors to face hard truths and engage in dialogue around difficult subjects.

To make these efforts transformative, the humanities require significantly more funding at the federal level. The Trump administration made repeated attempts to defund the NEH. Thanks to the NEH’s leadership and bipartisan support in Congress, small upticks in funding each of the last four years brought the allocation to $167 million for the agency for 2021.

By any measure, this remains woefully a low investment in our shared culture. Funding for the NEH peaked in 1994, reaching $177 million, or the equivalent to $310 million in today’s dollars. A return to that level would send a clear message about Congress’ appreciation for history.

Increased funding would also catalyze the preparations for an important milestone — the 250th anniversary of the signing of the Declaration of Independence in 2026. A well-funded NEH and its state affiliates could use the sesquicentennial to create more honest appraisals of our history. Such a celebration would serve as a powerful rebuke of what we witnessed in Washington on Jan. 6.

A greater investment in the NEH provides an affordable, inclusive first step to relaunch our democracy.

Published in The Providence Journal, February 5, 2021.