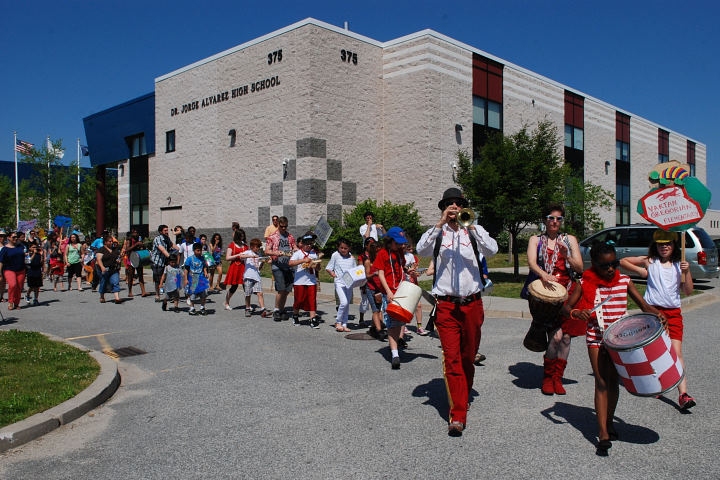 Rhode Island Monthly, May 9, 2014 • Jen McCaffery
A new mobile app combines personal stories with larger movements to bring Rhode Island history into the digital age.[above] The 2013 Urban Pond Procession departing from Alvarez High School in Providence for its annual parade around Mashapaug Pond. Alvarez High School is located at the former site of the Gorham Silver Manufacturing Company. Both the high school and Gorham are featured in the Mashapaug Rhode Tour.

Experience the Ocean State’s history from your phone.

The first phase of the project goes live today, with a new mobile app that is a “new kind of Rhode Island guidebook.” The app is connected to a GPS system to tell location-based stories that are organized either geographically or thematically.

“It’s a great tool for understand the place where you live or spend time in a totally new way,” says Anne Valk, deputy director of the John Nicholas Brown Center for Public Humanities and Cultural Heritage at Brown University. “It adds news layers of understanding about the past and the present sites in which we spend time.”

“It tells stories that range from indigenous people’s connection to places around the pond to stories of urban renewal, and in particular the demolition of a neighborhood and the building of an industrial park on one side of the pond,” Valk says. “And stories about industry, the Gorham Silver Manufacturing Company, and then environmental conditions and environmental activism around the pond today. So it really spans a long historcial period of time and covers lots of different topics related to the environment and economic and social issues in Providence.”

The Rhode Island Council on the Humanities has been organizing the effort, and segments on Slater Mill’s industrial history, Native American history in the Blackstone region, African American history by Ray Rickman, Rhode Island’s revolutionary war forts and the history of almshouses, orphanages and asylums by Bryant University’s Sandra Enos are also in development and expected to launch later this year.

The platform originated with historians based in Cleveland, and it has already been used to compile history of Little Compton and Tiverton through the Sakonnet Historical app.

The Rhode Tour app is available on both Apple and Android phones.