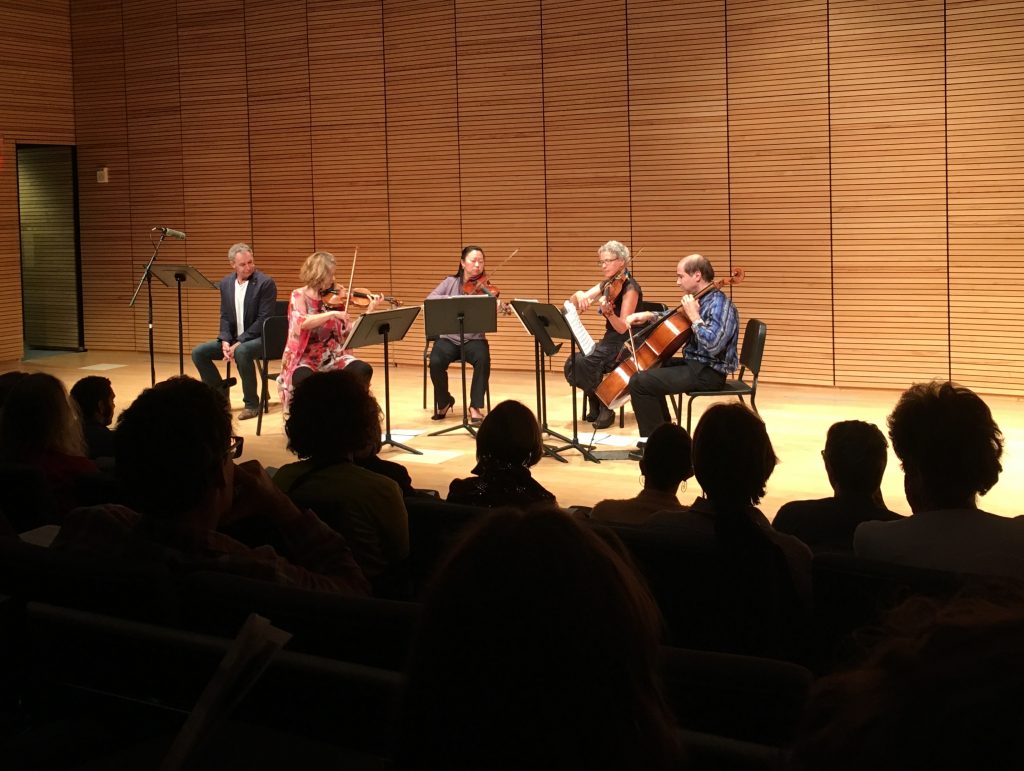 I once held on my knees a simple wooden box
in which a rainbow lay dusty and broken.
It was a set of pastels that had years before
belonged to the painter Mary Cassatt,
and all of the colors she’d used in her work
lay open before me. Those hues she’d most used,
the peaches and pinks, were worn down to stubs,
while the cool colors — violet, ultramarine –
had been set, scarcely touched, to one side.
She’d had little patience with darkness, and her heart
held only a measure of shadow. I touched
the warm dust of those colors, her tools,
and left there with light on the tips of my fingers.

-Ted Kooser, “A Box of Pastels”

So began Of Nature Composed, an hour-long immersion in spoken word and music performed by the Aurea Ensemble. The ensemble is comprised of six performers: Consuelo Sherba, founder and violist; Nigel Gore, spoken word; Emmanuel Feldman, cellist; Katherine Winterstein and Angelia Cho, violinists; and Chris Turner, harmonica and percussion, who did not perform the night I saw them. Aurea’s mission is to “investigate and invigorate the relationship between music and the spoken word… aspirer[ing] to unify the humanities and fine arts in dynamic, accessible and engaging ways through performance and educational outreach.” The group’s Facebook page described Of Nature Composed as “an exploration of the intersection of nature, science, the arts and humanities as we celebrate the Pulitzer Prize centennial and the sanctity of our environment.” Indeed, Of Nature Composed includes the work of three Pulitzer Prize winners, composer John Luther Adams and poets Galway Kinnell and Mary Oliver.

As I came to learn, the performance of Of Nature Composed enacted Aurea’s signature move, what I will call (for want of a better term) the juxtaposition. The effect of the method, in this case a series of 17 sound pairings of spoken word (poetry) and music (classical), left me disarmed and slightly confused in a wonderful way. Take the opening, for instance. The Ted Kooser poem above about Mary Cassatt’s pastels sets the mind moving along an associative path to the painter, to her preferences and, by the reference to the untouched pastels, to the possibilities she left unexplored (“…the cool colors—violet, ultramarine—had been set, scarcely touched, to one side. She’d had little patience with darkness, and her heart held only a measure of shadow”). And as the princely sounds of Nigel Gore’s voice fades, the evocative sounds of Indian Sketch no. 1 by Charles Griffes (1884-1920), written before his death by influenza in 1920, rise up, invoking the prairie or the sound of a night owl or another image of an undomesticated, still feral earthscape. This is no mere sound collage or sentimental voice over. The juxtaposition is far more dynamic than that.

To understand the effect, listen and watch Indian Sketch no. 1, performed by the Cypress String Quartet in 2010.

Throughout the concert I had the feeling of being pushed back on my mental heels, a sensation that left me wondering just how much of what I hear (always but particularly here and now) is shaped by my imagination. To answer this potentially vexing question requires the listener to become conscious of his or her associations and preferences (what do you see in the music– an owl, a hawk, the wind in the grass?) as well as to the sounds of the composition itself. As one listens deeply, feeling and sorting as she goes, one is no longer thinking about the juxtaposition but is aware of having been swept along by the sheer beauty of the music and the clarity of the sound itself. And before she can even laugh at herself, another pair begins. How about this one between poet Mary Oliver and composer Lou Harrison:

The trees have become
suddenly very happy
it is the rain
it is the quick white summer rain
the trees are in motion under it
they are swinging back and forth they are tossing
the heavy blossoms of their heads
they are twisting their shoulders
even their feet chained to the ground feel good
thin and gleaming
-Mary Oliver, “Maples”

In my mind’s eye I see trees in the wind, the familiar sight of a summer storm setting branches to “swing” and “toss” their heavy “blossoms” as the rainy wind whips around them. And then the music: Estampe’s Middle Eastern sounds strike a rhythm that does something to the image of the wind in the branches of a tree, making it strange and unfamiliar in turns, until once again I forget to think and am lost in the tension and resolution, the sheer intensity of the music. This effect—the effect of the juxtaposition—startles and delights me, and yet leaves me full of questions. Perhaps my reaction is a testimony to the narrow confines of a writerly life where I harness an established playlist to be “back drop” to my word-obsessed inner world. Here at the concert, my hierarchy of foreground and background disintegrates—pushing me back into a stance of listening, insisting I suspend my need to know what it is I am meant to think about and experience whatever this is.

I asked for a sit down with artistic director Consuelo Sherba to find out if I understood the methodology. As I put my question to her, she interrupts. “You first.” Ends up I am not as far off mark as I worried. The coming together of the spoken word and the music is meant to open up the space of listening anew, to de-contextualize what the listener thinks she knows and to re-contextualize it through an unexpected associative spark. Allow the sounds to move bi-directionally—the words to shape the music and the music to shape the words—in an elegant elliptical. Defer your need to know exactly.

I ask Consuelo to talk about one example of a pairing—how she selected it, how it worked, why it worked. She clucks her tongue like a mother asked to choose her favorite child (“how to choose, how to choose?”) These are all hers. She is the essayist, the musician, the artist, wrapped into one.

By way of answer, Consuelo talks first about the tradition of naturalist writing in America in the early 19th century, particularly the work of Henry David Thoreau whose words inspired composers and writers alike. She explains the intellectual genealogy she traced from the transcendentalists to the modernists through the trope of nature, from Thoreau to John Cage to Ted Kooser and John Luther Adams. When pressed to choose, Consuelo puts her finger on the end of the program, on the pairing between Ted Kooser and composer John Luther Adams. I am delighted because this particular pairing drove home my growing appreciation of the juxtaposition as a device of listening.

The tin man is cold:
The glitter of distant worlds
Is like snow on his coat.
Free-falling through space,
He spreads his arms
And slowly turns,
Hands reaching to catch
The white, elusive
Dandelion fuzz
Of starlight. He is the dove
With wings of purest gold
Sent out upon the deep
To seek a place for us,
The goat upon whose back
We’ve sent our problems
Into exile, the dreamy beast
Of peace and science
Who now grows smaller, smaller,
Falling so gracefully
Into the great blank face
Of God.

Who cannot feel in the music the vast black space into which the Voyager Satellite disappeared in 1977 and not marvel at the audacity of the cold “tin man” sent out like the biblical goat into the unknown in search of redemption as told by the poet? The sounds—pulled tautly, a hair’s breath from a scratch—amplify the feeling one gets from confronting the universe through a poem. I am reduced to a fifth grader on a field trip to a planetarium, dumbstruck by the scale of the known and unknown universe I have just been made to experience.

“If this is your 21st century essay, what is the argument?” I ask Consuelo. The essay, she says, is a space of meditation. And she goes on to describe the process by which she put together this guided meditation on nature. It involved many books she had gathered from the city’s libraries and spread out on her table. It involved knowing where she wanted to start and where she wanted to end, and then following the pulls of her own imagination to this composer, that journal entry, this poem. She used the metaphor of shape: she had a shape in her mind that she followed as much as she invented. She listened. She trimmed, she pivoted, opened new pathways and returned to themes set in the parameters of the commission to lay out her argument: here is nature composed and represented, here the Pulitzer Prize at 100, here the essay as an exercise in scale and perspective, and most importantly hear the experience of inspiration at the heart of the humanities.