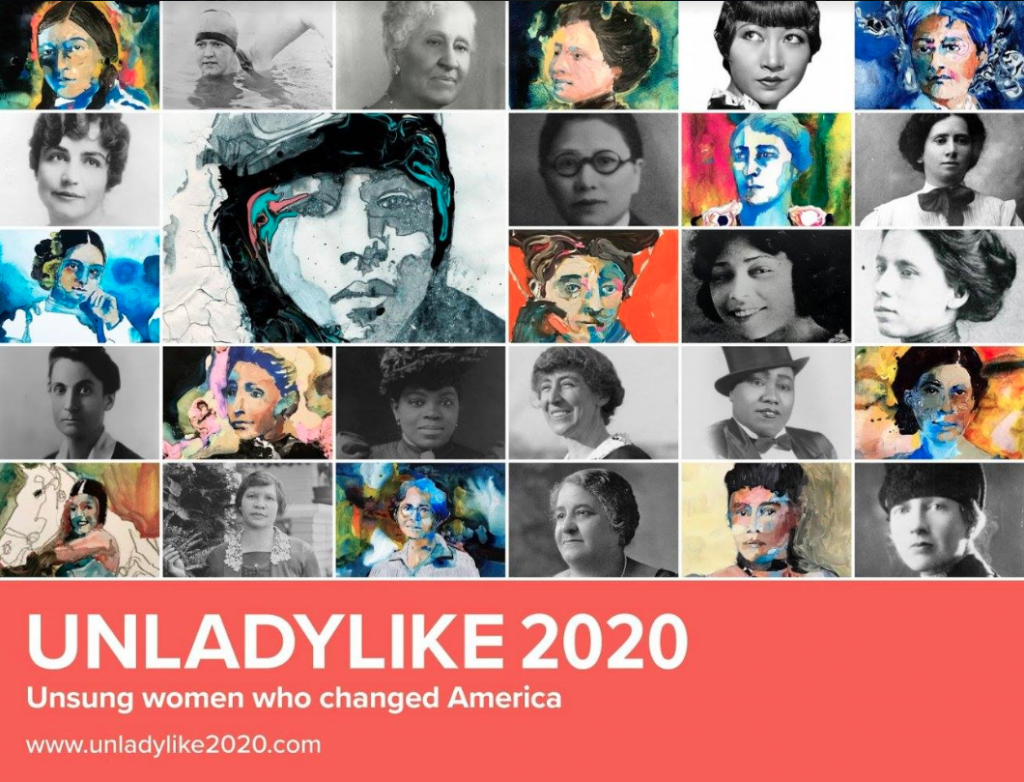 UNLADYLIKE2020 is an innovative multimedia series featuring diverse and little-known American heroines from the early years of feminism, and the women who now follow in their footsteps, in honor of the 100th anniversary of women’s suffrage. Presenting history in a bold new way, the rich biographies of 26 women who broke barriers in male-dominated fields at the turn of the 20th century, such as science, business, politics, journalism, sports, and the arts, are brought to life through rare archival imagery and captivating original artwork and animation, along with interviews with historians, descendants, and accomplished women of today who reflect upon the influence of these pioneers.

“NEH’s ‘A More Perfect Union’ initiative—intended to help prepare the country to commemorate the 250th anniversary of the United States’ founding in 2026—was created to fund projects like UNLADYLIKE2020 that explore the individuals, events, and ideas that have shaped our history,” said NEH Chairman Jon Parrish Peede. “This innovative multimedia series brings the stories of 26 underrecognized trailblazing American women to a broad public. NEH is proud to be a major sponsor of UNLADYLIKE2020, and to be joined in our support by a coalition of 11 state and local humanities councils. The breadth of support for this series is a testament to both the excellence of these documentaries and the importance of the achievements they highlight.”

State humanities councils are independent nonprofit 501(c)(3) organizations that operate through public-private partnership to put the humanities into action in communities across the country. There are 56 state and jurisdictional humanities councils which each receive support from the National Endowment for the Humanities, as well as from private donors, foundations, and corporations. These state councils in turn invest directly in their communities through grants to cultural organizations, historical sites and societies, libraries, museums, documentary filmmakers and researchers, as well as through statewide programs and initiatives. The Federation of State Humanities Councils was founded in 1977 as a national association of the councils with the mission to provide leadership, advocacy, and information to help members advance programs that engage millions of citizens across diverse populations in community and civic life.

Charlotte Mangin, the Creator, Executive Producer, Director and Writer for UNLADYLIKE2020, states that the project could not have reached fruition without the early support from the 11 state humanities councils. “That support was the spark that catapulted this project into being,” Mangin said, “enabling the enactment of activities from research to production to community engagement. That early endorsement provided confirmation of our project’s value and appeal. In addition, the support of these diverse state humanities councils signaled to national funders, such as the National Endowment for the Humanities and the National Endowment for the Arts, that our project was humanities-rich, vigorously researched, and a vehicle to elevate local histories and the narratives of little-known women history makers.”

“We are so proud that 11 state humanities councils have joined the National Endowment for the Humanities in supporting this critically important series,” said Esther Mackintosh, president of the Federation of State Humanities Councils. “These courageous women not only led the effort to challenge and change the stereotypes and status quo of women, but were instrumental in creating a more equitable future for all Americans. We couldn’t be happier to see our members help bring their histories and stories to light, especially in this pivotal year commemorating the 100th anniversary of the 19th amendment passage.”

The joint support from state humanities councils across the country, coupled with the support from the NEH, illustrates the collective power of this network to amplify the stories that shape our national narrative and highlights the importance of ensuring access to the humanities in communities large and small.

The Rhode Island Council for the Humanities supported UNLADYLIKE2020 through a mini grant in 2018 to support initial research and a community forum and through a major grant in 2019 for continued development of the stories of Sisseretta Jones, the first African-American to sing opera on the mainstage of Carnegie Hall, and Annie Smith Peck, a mountaineer and adventurer in the late 1800s and early 1900s, as part of the series. Mangin said, “The Rhode Island Council for the Humanities has been a thought partner, guide, connector, and supporter in the most generous and sincerest of ways.”

As this project launched, Executive Director of the Rhode Island Council for the Humanities Elizabeth Francis noted that, “The Council was pleased to support UNLADYLIKE2020 to highlight the stories of Sisseretta Jones and Annie Smith Peck and to connect the project with researchers and public humanities practitioners here in Rhode Island at Stages of Freedom, the Rhode Island Historical Society, and the Providence Public Library who have been working to preserve and illuminate these stories for decades.”

The Rhode Island-focused stories will be released online: Annie Smith Peck on June 10, 2020 and Sissieretta Jones on June 24, 2020.

ABOUT THE RHODE ISLAND COUNCIL FOR THE HUMANITIES:
The Rhode Island Council for the Humanities seeds, supports, and strengthens public history, cultural heritage, civic education, and community engagement by and for all Rhode Islanders. As an independent, nonprofit affiliate of the National Endowment for the Humanities, the Council has provided over $8 million in grants to support more than 650 organizations throughout the state of Rhode Island, as well as independent researchers, filmmakers, scholars, and oral historians, since its founding in 1973.

For more information, contact Rachael Jeffers at rachael@rihumanities.org or (401) 273-2250.