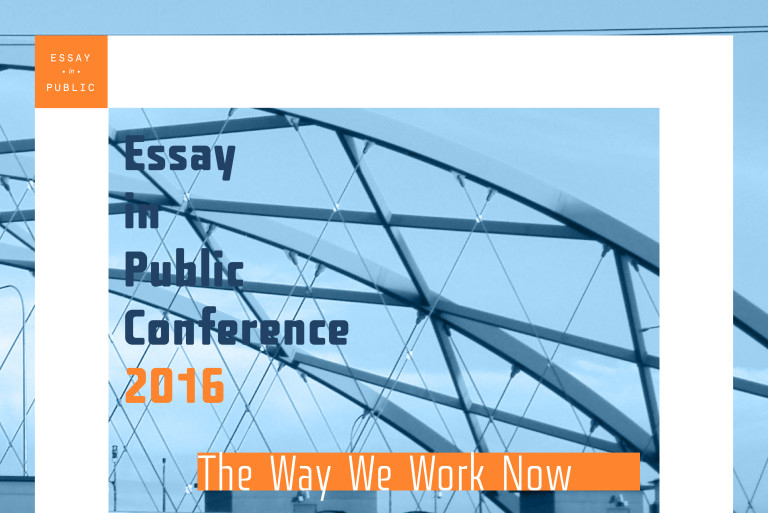 Essay in Public Conference Press Release, March 3, 2016
The Essay in Public conference on March 18, 2016 is the first in a series of collaborative events called, ‘What is the 21st Century Essay?,’ facilitated by the Rhode Island Council for the Humanities to commemorate the 100th anniversary of the Pulitzer Prizes in 2016. An exploration of the changing nature of journalism and the humanities in the digital age, ‘What is the 21st Century Essay?’ programming thematically focuses on environmental issues because of their urgency and relevance to our health, communities, and economy. To learn more visit rihumanities.org/program/pulitzer.

The 2016 Essay in Public Conference entitled The Way We Work Now will bring together humanists, essayists, and journalists interested in reaching the broadest national audience through a variety of media. The conference focuses on best practices in reporting and research about long-term social, ecological, and economic conditions.

It is the first event in a year-long series presented by the Rhode Island Council for the Humanities, called What is the 21st Century Essay?, a commemoration of the 100th anniversary of the Pulitzer Prizes. The Essay in Public project is a collaboration with URI, Brown, and The New School, exploring intersections between the humanities and journalism through the lens of environmental issues.

Conference keynotes include Stephen Henderson, Editorial Editor of The Detroit Free Press, and a 2014 Pulitzer Prize winner for commentary, and Sarah Schweitzer, a features writer from The Boston Globe, and a 2015 finalist for the Pulitzer in Feature Writing.

The day will also include an Ask the Press lunch session with Henderson and Schweitzer and a morning round table with local panelists, including:

Lucas Mann, Author of Class A: Baseball in the Middle of Everywhere and Assistant Professor of English at the University of Massachusetts Dartmouth.

Sunshine Menezes, Associate Director of the Office of Marine Programs and Executive Director of Metcalf Institute for Marine & Environmental Reporting at the University of Rhode Island Graduate School of Oceanography.

The conference takes place from 9am to 5pm on March 18, 2016, at the URI Feinstein Providence Campus, 80 Washington Street, Providence, RI 02903. The event is free and open to the public. Box lunches are available for purchase. Attendees are asked to register here.