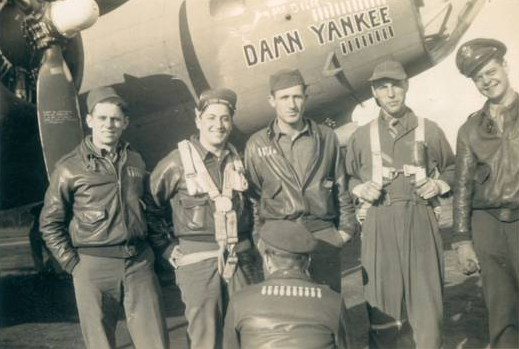 It sounds like a Hollywood thriller, maybe starring Matt Damon or Brad Pitt. It’s World War II. A young B-17 pilot bails out over occupied Belgium after his bomber, the Damn Yankee, is damaged by German flak on a bombing run and swarmed by German fighters. The date is Dec. 1, 1943. Of the 10 men in the crew of the Damn Yankee, five are killed, four are captured. Only the pilot escapes. Over the next months, he evades the Germans, making his way across Europe on stolen bicycles. He’s hidden by members of the Resistance and sympathetic Catholic priests, even though he is Jewish.

First he tries to escape from France into Spain, but the snow in the Pyrenees Mountains is too deep. So he heads for Switzerland, fighting alongside the French Resistance on the way. Even after he makes his way to Switzerland, his exploits aren’t over—he is recruited by American spymaster Allan Dulles to go back into France as a spy for the Office of Strategic Services, the precursor to the CIA. Eventually he is sent back to England, where his mother finally finds out her son is safe—on Mother’s Day.

Our star is not Matt or Brad, but Bruce Sundlun, Rhode Island’s former governor, whose World War II experience is told in a new documentary, “Above and Beyond,” by The World War II Foundation, headed by filmmaker Tim Gray. The hour-long documentary will premiere Thursday at the Providence Performing Arts Center.

Gray said he first heard Sundlun’s story in detail in 2006, when he was interviewing Sundlun for another project.“It was one of those moments when you look at your cameraman and you think ‘We’ve got to make a film about this,’ ” Gray said.

After Sundlun died in 2011, Gray contacted Sundlun’s daughter, Kara Sundlun House, who works as a news anchor and talk-show host for WFSB-TV, a CBS affiliate in Hartford, to see if she would be interested in working on the project.

Sundlun House, 39, said she knew some of the details from the stories her father told over the years. “At your age I walked across Europe!” Sundlun used to say when Kara complained about getting parking tickets. But she said her trip to Belgium with Gray and videographer Jim Karpeichik in September 2013, brought home her father’s experience in a new and vivid way as she stood in the field where her father’s plane crashed or biked the back roads he used to make his escape.

Sundlun House and Gray were met by one of Bruce Sundlun’s sons, Tracy, when they got to Europe. They went to the small Belgium town of Jabbeke, not far from Bruges, and stood in the field where the Damn Yankee crashed. Pieces of the plane still turn up in the field, more than 70 years after the plane went down. In Jabbeke, they spoke to Luc Packo, who is the keeper of the flame for the Damn Yankee and its crew.

Packo, a metal worker, wasn’t born until after the war. But he’s been collecting pieces of the Damn Yankee since he was 12, which he keeps in carefully cataloged bins. He has found everything from tiny pieces of Plexiglas to a large piece of a propeller, pierced by a German bullet, and inscribed by Bruce Sundlun. “He treats those pieces of the plane like they’re his children,” Sundlun House said. “I asked him why he cared so much. He said it was because my father, and the others, ‘gave us our freedom.’ ”

Through Packo, the filmmakers were able to speak to Roger Roels and Andre Hautekeete, who witnessed the crash, and Firmin Saelens, the first English-speaking person Bruce Sundlun met after the crash. Saelens led Sundlun to a farmhouse where he received temporary shelter and treatment for his wounds.

Members of the Sundlun family met Packo in 2009 when Sundlun traveled to Europe for the unveiling of a memorial to the Damn Yankee. Now Packo will journey to the United States for the first time to see Thursday’s showing of “Above and Beyond.” “Luc arranged the interviews. He knew who to talk to, where they were,” Gray said. “He’s that one person who can turn the tide of a documentary film.” The hour-long film tells Sundlun’s story through World War II aerial combat footage, vintage photos, including some of the Damn Yankees’ flaming wreckage, occasional reenactments using modern actors and interviews.

Kara Sundlun House is the narrator. “This is much different than reporting on someone else’s story, when it’s your own father,” she said. “It’s a lot more emotional.” Sundlun House said she went to a Belgium church where her father had taken refuge, and lit a candle in memory of her father. “When I went into that church, I felt like my dad was with me,” she said. “I walked away with a different understanding of him—how he became the tough, hard-nosed warrior that he was.”

“Above and Beyond” uses footage of two separate interviews with Sundlun—the 2006 session with Gray and a 2009 interview with filmmaker Jon Raben. Sundlun’s larger-than-life personality gives the documentary plenty of character. “Once Bruce starts to talk, there’s no stopping him,” Gray said.

Sundlun describes his crew, the bombing mission, bailing out at tree-top level, and how the resident of one Belgian farmhouse yelled at him for dripping blood and mud onto her clean floor. He tells how the Resistance taught him to steal bicycles. “I was the best bicycle thief in Europe,” he declares, claiming he stole 159 bikes while eluding the Nazis in 1943 and 1944.

“Above and Beyond” is The World War II Foundation’s 11th documentary, which are donated to American Public Television. The films are shown on PBS stations around the country. There’s no date yet for when the documentary might air in Rhode Island.

“Above and Beyond” will be shown Thursday, August 21 at 7 p.m. at the Providence Performing Arts Center. Admission is free. To reserve seats for the event, email Tim Gray at wwiifoundation.org.